Charlie Goodwin drew a shaky breath and tapped furiously on her phone, the screen illuminating her face in the otherwise dark storeroom. [opening of The Holiday Swap]

"I know how she feels. Work can be all-consuming. It's hard to remember there's more to life than the show."
"'The show'?"
"Oh, I just meant, like, work can be a  sort of circus show . . . You know? Charlie sipped her water, hoping Jake didn't notice she was flustered.  [excerpt from 56% in The Holiday Swap] 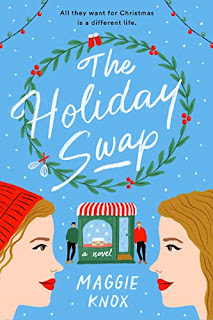 The Holiday Swap by Maggie Knox
G.P. Putnam's Sons, 2021
Romance/Holiday; 351 pgs
Writing team Marissa Stapley and Karma Brown, writing as Maggie Knox, have written a sweet romance about identical twins who switch places over the holiday season. Charlie Goodwin cohosts a reality baking show with a condescending and handsy cohost. When she suffers a concussion in an accident, she is forced to take some time off--only it couldn't be at the worst time. With her career on the line, she begs her sister Cass to trade places with her. Cass is dealing with her own issues--it's holiday time at the family bakery and business is extra busy. She's just broken up with her long-time boyfriend who cannot seem to accept that they are not a couple anymore. Plus, rumor has it a big box bakery may be moving to town, which will threaten the Goodwin family's business. Cass readily agrees to the switch, and the two step into each others lives.
Both Charlie and Cass are different enough personality wise, but also similar as sisters often are. Neither is completely happy with their lives the way they are and switching places gives them an opportunity to see what life might be like in each other's shoes. I really enjoyed my time with Charlie and Cass as they discovered something in themselves they did not realize they had. For Charlie, it was reconnecting with her roots and realizing she does not have to be someone she isn't. And for Cass, it was realizing she has the courage and strength to go after her own dreams and set her own path.
While playing the role of Cass, Charlie is still dealing with the side effects from her concussion while at the same time managing her family's business at their busiest time of year. The schedule is hectic to say the least. Her sister's ex keeps popping up at the worst times, and she's is falling hard for the dependable and swoon-worthy firefighter Jake. Meanwhile, her sister Cass is putting on high heels and taking to the stage, trying to stay ahead of the manipulative and conniving Austin, her cohost and nemesis. They are both up for the same job, a new baking reality show, and Cass doesn't want to blow it for her sister. There's also the cute (and also swoon-worthy) Miguel, the physician's assistant who had first diagnosed Charlie with her concussion. He and Cass have really hit it off and their relationship is getting serious fast. While Cass and Charlie both struggle with how to tell the new men in their lives the truth, they also make little and sometimes big changes in each others lives--all for what each of them considers for the better. But will the other sister feel the same way?
Twins switching places is not a new trope but I do enjoy reading these types of stories from time to time. It is always interesting to see the direction an author will take her characters and story. The Holiday Swap was an enjoyable and sweet holiday romance. Cass and Charlie are both relatable characters as are their love interests.  I also really liked seeing the growth in some of the side characters, particularly Sharon, who I admittedly was not fond of in the beginning. This holiday novel reminded me of a Hallmark holiday movie in many ways. While not a stand out holiday romance for me, it was a pleasant way to spend a few hours this holiday season.

"I'm sorry, could you repeat that?" Tug Muehler, normally calm and composed, leaned over the check-in desk, grasping each side with his muscular arms. [opening of Chaos and Cranberries]

November Bean had gone home to change into a jumpsuit adorned with tiny reindeer, matching glasses frames, and headband, too. She had bells that jingled on her sneakers, which she hadn't removed, and something brown and shiny around her neck. Lanie warned Feather privately not to ask about it. [excerpt from 56% in Chaos and Cranberries] 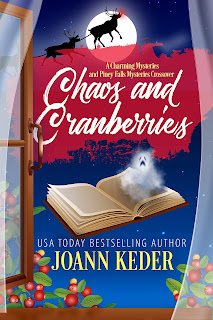 Chaos and Cranberries (A Piney Falls/Charming Mysteries Christmas Crossover) by Joann Keder
Purpleflower Press, 2022
Crime Fiction/Cozy/Paranormal/Holiday; 350 pgs
I won a copy of Chaos and Cranberries this past week in a giveaway and decided to dive right in. There's nothing like a little murder to spruce up the holiday season! This is my first book by Joann Keder, although not the first in her two series featuring the Piney Falls and Charming characters. And while I generally prefer to start at the beginning of a series, I had no trouble jumping into both in this crossover mystery. Chaos and Cranberries is a great introduction to several unique and fun characters. Not to mention I now I have two new cozy series to add to my already burgeoning cozy mystery to read list!
In Chaos and Cranberries, Feather Jones and her boyfriend Tug arrive at their hotel in Piney Falls ready for a little Christmas vacation only to find out their room isn't available. Someone has been murdered and the room is now a crime scene. Lanie Anders, who works at the hotel, invites Feather and Tug to stay in hers and her husband's guesthouse when she finds out about their dilemma. What could be a more perfect crime fighting team than Feather, Lanie and friends? Lanie is known about town for having a nose for solving crime, and Feather's not new to investigating crimes either. Feather has the advantage of being able to communicate with the dead too, which proves an asset in Chaos and Cranberries. With Christmas right around the corner, the women hope to find the murderer in time to still enjoy the holiday.
I was hooked from the beginning of this mystery. The characters are quirky and fun. I appreciated that the author gives the reader a glimpse into the tragic pasts of the main characters. This is not a novel where you will find a loving supportive family behind the protagonists--but rather a strong and supportive group of friends who chose their own family. Lanie seems like the kind of person everyone loves and would want to call a friend. She's inviting and kind. She and her husband Cosmo are both great characters and are so much in love. I also really liked Feather and Tug. Both are down to earth characters and clearly devoted to each other. I found Lanie's bestfriend a bit overwhelming at times, but she did provide much needed comic relief.
I enjoyed the witty banter between the characters and the paranormal aspects that Feather's abilities brought to the story. The mystery itself was darker than I anticipated--creepy with a teaspoon of macabre thrown in--but that is not a bad thing. There were plenty of twists and an unexpected turn or two. The novel is high in suspense, and I couldn't turn the pages fast enough to see what would happen next. If you like edgier cozy mysteries with a strong paranormal element, then this cozy might be a good one for you.

Do either of these books sound like a book you might enjoy reading? If you have read them, tell me what you thought!
© 2022, Musings of a Bookish Kitty. All Rights Reserved. If you're reading this on a site other than Musings of a Bookish Kitty or Wendy's feed, be aware that this post has been stolen and is used without permission.
Posted by Literary Feline at 12/29/2022 09:00:00 PM