I noticed the first crow when I opened the front door for the cat on the morning of my sixtieth birthday. ~ Opening of Becoming Crone 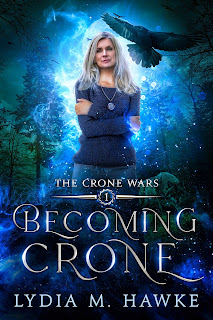 I  first heard about this series on the author's Twitter feed and was intrigued: a sixty year old heroine who discovers she possesses a powerful magic. So many novels feature teens or young adults coming into great power and having to save the world. But what about a woman like Claire Emerson, just your average divorced, menopausal grandmother leading a relatively normal life? Until she's not. First come the crows. Then she discovers a pendant that unlocks a gate to a remote house in the woods where she finds a gargoyle and a shapeshifting wolf waiting for her arrival. At first Claire believes this all has to be a mistake, but when powerful Mages begin to target her, she soon finds out she is part of a legacy of magic. Claire must learn to harness her power so she can battle an evil greater than she ever imagined.
I found Claire to be a relatable character, and not just because I can relate to some of her physical struggles and her habit of overthinking things. She's not the most assertive woman in the beginning, mostly staying within her comfort zone, and so it's not hard to believe she has trouble accepting that she's one of the chosen, a Crone, gifted with magic and a calling to save the world. I enjoyed seeing her grow into her confidence, even if not yet her mastery, and power. It's quite the wild ride. There are evil gnomes and the gargoyle, Keven, and shapeshifter, Lucan, make the best sidekicks. Claire isn't as alone as she thinks she is, and I especially loved when the local witches came to her aid.
Although I am not a huge fan of traditional Arthurian tales, I do have a soft spot for anything having to do with Morgana and especially like to see those old tales turned on their ear with a more feminist twist. The author has created such a twist and then some in this series. The world building in this novel is really good and it was interesting to see how the magical and "real" worlds overlapped.
Becoming Crone was everything I hoped it would be. It is witty, action-packed and full of magic. There's something empowering about seeing an older heroine coming of age so to speak later in life. Author Lydia M. Hawke has created quite the world in her Crone Wars series. I look forward to seeing where she takes us next.

The crows were back. ~ opening of A Gathering of Crones 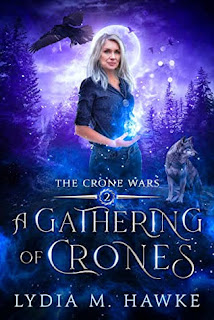 A Gathering of Crones (The Crone Wars #2) by Lydia M. Hawke
Michem Publishing, 2022
Fantasy; 250 pgs
Claire's efforts to master her magic have been difficult at best. She has a lifetime of magic to catch up on, having not known she was only a witch, a Crone in fact, before her sixtieth birthday. And now the fate of the world rests on hers and the other Crones' shoulders.  When one of the Crones shows up unconscious on her doorstep along with her surly shapeshifting protector, Claire knows the short peace they have had is over. The new Crone's presence brings out just how out of place Claire feels. She's insecure as it is about her position among the Crones and cannot help but doubt herself. But it may be she is the only hope in bringing the Crones together so they can fight Morok and his followers.
It's getting harder for Claire to keep her magic a secret from her son and his family, but her son does not make it easy for her. I could not help but see real life parallels in Claire's struggle with her son, that of the relationship between an aging parent and an adult child. In Claire's case, she is still very much an independent woman capable of making her own choices--and taking care of herself--but her son tries to take on a more parental role, concerned about his mother's health, questioning her life choices, and trying to control her life. It's very much like his father did to his mom during his parents' marriage and Claire finds herself resenting that fact even more. She loves her son, his wife and her grandson and does not want to ruin their relationship, but balancing both her worlds is proving to be a real challenge for her.
Natalie, Claire's daughter-in-law, becomes one of my favorite characters in this book even as my opinion of Claire's son wasn't very high. Lucan is as sexy and sweet as ever. Keven remains a favorite.
Claire goes through quite a bit in A Gathering of Crones, much of which I don't want to go into here or else risk spoilers. What I will share is how low her situation gets--the isolation, threat of losing her magic, and the self-doubt. I continue to love the world building in this series. The reader gets to learn more about the other Crones, each with their own specialty of elemental magic. The cliffhanger was maddening, but luckily I had the next book in my queue to read.

There were no more crows. ~ Opening of Game of Crones 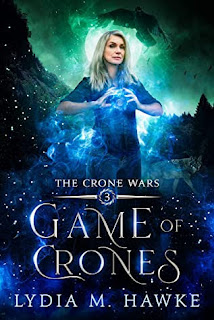 Game of Crones (The Crone Wars #3) by Lydia M. Hawke
Michem Publishing, 2022
Fantasy; 255 pgs
The situation is dire. Claire made the only choice she could think of to save the Crones and hopefully the world in the process. The four elemental Crones were the deserving magic holders, the ones with a purpose, she's convinced herself. But when one of the Crones turns the other Crones over to Morok and his dark mages, she is the only person who may be able to stop him from reclaiming his powers and destroying the world. Claire sets out to track down the traitor and confront both her and Morok. But first, she has to find her magic and hope it is not too late for her friends.
There is plenty of action in this installment of the series like in past books, but this one is also more reflective in some ways. Even when she feels most alone, Claire finds she has help in unexpected places. Claire really comes into her own in Game of Crones, not only in mastering her magic but also in accepting who she is and believing and trusting in herself. She carries a lot of baggage from her past and letting go of that takes time, working through the anxiety and self-doubt as we have seen in the first two books as well as this one. I have enjoyed being a part of this journey alongside of her. Sometimes relating a little too well. That isn't to say her story is over and she's suddenly perfect. It's not and she still has work to do.
There were moments in this novel when I could not help but notice the similarities between our reality and the world the author has created in novel--this time more so in who the villain was and what he represented. They matched the realities our world faces today. The greed and violence. The growing division among the people, including among family and friends. As well as the misogyny and hate.
I wish the author would have given the reader more background about each of the Crones, but perhaps she is saving that for future books set in the same world. One can hope!
I know some readers might be turned off by the cursing. While there is cursing in this series, it is not excessive. It's used with purpose. It's a tool of empowerment for Claire who has always done what is expected of her and in staying within the bounds of what is considered proper or polite. It is hard for her to step outside her comfort zone--something she does with great reluctance sometimes. Given everything she's been through, I can't help but want to curse with her, frankly.
I love that all three of these books open with a mention of a crow or crows. I appreciate creative details like that, however minor they may seem.  This is a fast paced and fun series. I enjoyed getting to know Claire and the other characters. I have the fourth book, Crone Unleashed, on pre-order when it comes out in August and cannot wait to read it!