I scanned the passing countryside in vain for signs of life. ~ opening of Bait and Witch 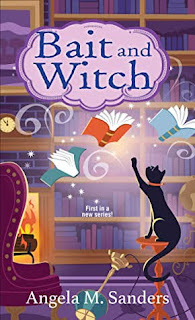 Bait and Witch (Witch Way Librarian Mysteries #1) by Angela M. Sanders
Kensington, 2020
Crime Fiction/Cozy/Paranormal; 336 pgs
Taking a job in a remote small town in Oregon seems like the best way to hide from those who may be looking to silence librarian Josie Way after she becomes a witness in a corruption scandal. Instead of the quiet safe life she was expecting, however, Josie finds herself in the middle of another crime investigation--one involving murder--when she stumbles across a body in the woods. As if that wasn't shocking enough, strange things begin to happen around Josie as she comes into unexpected magical abilities that had being laying dormant most of her life.
Her new employer had not told her the library, housed in a Victorian mansion, was at risk of being torn down when she accepted the job. There is speculation the murder may be related, but no one knows for sure. Josie decides to use her newfound powers and connection to the books to solve the murder while at the same time try to save her new job and friends.
This paranormal cozy mystery was a delight to read. There are plenty of secrets--and not so secret secrets--Josie finds herself looking into, which helps give the novel a stronger sense of place. At times, the murder investigation takes second seat to the saving of the library, but it did not detract me from the story. Author Angela M. Sanders pulled me right into the pages of the book, and I felt like I was walking among the Wilfred residents. Josie's backstory is a big part of this novel. The reader sees her discover her magical powers--and what book lover would not especially like that her magic centers around books?  Bait and Witch whet my appetite for reading more in the series and that's exactly what I did!

Still catching her breath, Mrs. Garlington plopped herself on a stool at the counter of Darla's Café ~ opening of Seven-Year Witch 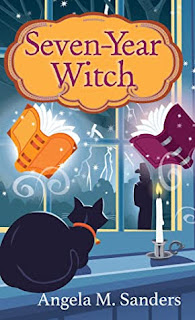 Seven-Year Witch (Witch Way Librarian Mysteries #2) by Angela M. Sanders
Kensington, 2021
Crime Fiction/Cozy/Paranormal; 288 pgs
I did not wait long to jump into the second book of the Witch Way Librarian series featuring Josie Way. In Seven-Year Witch, Josie is still exploring her newfound magical abilities, learning from letters here grandmother had left behind for her, each letter a new lesson. The letters seem to correspond to real life events in Josie's life--and the latest letter is about curses.
Plans to build a retreat center at an old mill site in town are underway, but there are rumors it is cursed. When the ex-wife of Sam Wilfred, a descendant of the town's founders, goes missing and the mill's project's architect is found dead, people start to wonder if the curse is more than a rumor. Sam is the number one suspect, but Josie doesn't believe he is involved. Josie puts her magic and logic to use to get to the bottom of what happened and save Sam's good name.
My favorite cozies are ones with a paranormal element; add in a bookish setting and I'm in cozy mystery heaven. The way the books respond to Josie is one of the aspects that make this series so unique. I was transported back to Wilfred, Oregon and into the lives of Josie Way and her feline familiar, Rodney, in Seven-Year Witch. This novel takes us a little deeper into the history of Wilfred and also into Sam's complicated life. Josie has a good heart and will do anything to help her friends. The mystery is more center stage in this novel and the climax is quite suspenseful.

I dragged two wing chairs to the front of the New Release shelf. ~ opening of Witch and Famous 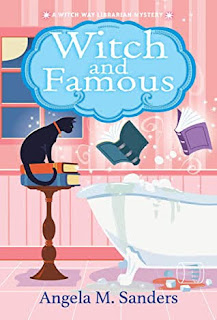 Witch and Famous (Witch Way Librarian Mysteries #3) by Angela M. Sanders
Kensington, 2022
Crime Fiction/Cozy/Paranormal; 304 pgs
Witch and Famous is the third book in the Witch Way Librarian cozy mystery series by Angela M. Sanders. Josie Way has settled into life in Wilfred, Oregon, living in an apartment above the library in an old Victorian House. Famous movie star Daphne Morris has come to town to interview one of Wilfred's very own novelists for her book club. She is very much a diva--spoiled and used to getting her way.
When one of Daphne's entourage is murdered in a style much like the murder of a character in the romance novel being highlighted by the book club, the novelist (whose name I am purposefully withholding if you haven't yet read the first book) becomes the number one suspect. Could the intended victim really been Daphne though? She seems to have quite a few enemies who have reason to do her in. Getting to the bottom of the murder is at the top of Josie's to do list. With the help from the voices in her books and her feline familiar Rodney, Josie sets out to do just that.
With a long list of suspects, Josie has her work cut out for her. The sheriff seems distracted and she is not sure how much she can rely on him for help. Josie ups her use of magic in this third installment of the series. She's growing more confidant in the use of her powers and, put together with her resourcefulness, there is not much she cannot do. I enjoyed getting to know more about the Wilfred townspeople. This installment was infused with humor and was a lot of fun to read. I can see this series becoming a favorite.