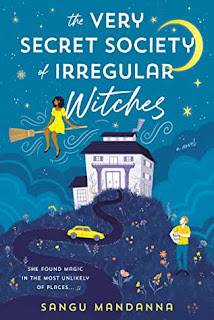 The Very Secret Society of Irregular Witches by Sangu Mandanna
Berkley, 2022
Fantasy/Romance; 334 pgs
Sometimes a book comes along at just the right moment in my life and is everything I need and more than I hoped it would be. The Very Secret Society of Irregular Witches was was exactly that read for me this past fall.
It is described on Goodreads as "a warm and uplifting novel about an isolated witch whose opportunity to embrace a quirky new family—and a new love—changes the course of her life." It is the story of Mika Moon. She is part of secret society of witches with  very strict rules about not exposing their magic to outsiders. And they must remain separate from one another so as not to draw attention to themselves. They meet very rarely as a group, and then only to check in. Mika, who was orphaned as a child, keeps to the rules--somewhat. She has her own vlog, positing videos in which she pretends to be a witch. No one takes those too seriously, after all. That is until she receives a message from a stranger offering her a job as a nanny for three young witches. Taking a chance, Mika travels to Nowhere House, in a remote part of the country. She is not sure what to expect, but knows full well she is breaking every rule. There she meets the children, along with a retired actor, the estate's caretakers, and the grumpy librarian, who makes it clear he does not want her there.
I liked Mika from the start. She's good hearted and independent minded, used to moving every few months to avoid getting too attached or close to anyone. When she gets the message from Ian, a retired actor now in his 80's, she is curious, but does not take it too seriously. She makes the drive out to Nowhere House fully anticipating to turn the job down. She does her best at first to deny the existence of magic, but it is clear early on that magic is not a well kept secret at Nowhere House. It was hard not to fall in love with all the residents of the house: Ian, of course, who  is witty and charming, and his husband, Ken, who has is a gifted gardener; the housekeeper Lucie who is inviting and kind; Jamie who has his own set of charm but in a rough sort of way, and who is very protective of the girls; and then there are the three young witches, all orphans themselves who had been taken in by their absent guardian.
It's obvious the residents of Nowhere House are hiding something, but they are clear about one thing. They hope that Mika can teach the girls to control their magic in a short amount of time--at least before the guardian's lawyer arrives to pick up some papers. No one can find out they are witches, especially not the lawyer. Mika isn't sure she can manage it, but she reluctantly agrees to try.
This novel is funny and sweet with a dash of romance and mystery thrown in. Jamie may not trust Mika at first, but the two realize early on they have to come to some sort of an arrangement, if only for the girls' sakes. The characters had interesting backstories, and I liked the authors approach to the diversity of backgrounds of those characters. I enjoyed the funny moments and situations the characters would sometimes get into. Mika, who longed so much for connection and yet pushed it away at every turn, comes to really care for the Nowhere residents. She needs them as much as they need her.
When I first started reading The Very Secret Society of Irregular Witches I was hoping for a novel that would leave me smiling--and I definitely got that. There were even some tears mixed in. This book has a lot of heart.

Half an hour before the alarm will be sounded for the first time in decades--drawing four frantic old women and a geriatric crow from all corners of the sprawling manor--Ursula is awoken by insistent knocking, like giant knuckles rapping against glass. ~ Opening of The Witches of Moonshyne Manor 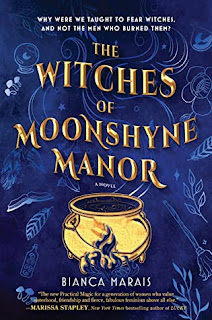 The Witches of Moonshyne Manor by Bianca Marais
Mira, 2022
Fantasy; 400 pgs
I eagerly dove into The Witches of Moonshyne Manor, looking forward to this tale of octogenarian witches trying to save their home as the bank threatens to foreclose on their mortgage and a town that seems to be turning against them. I enjoyed getting to know these five women, each of them with their own strengths and abilities.
With the threat of losing the home they have built their roots in for the majority of their lives, the sisterhood is counting on the return of Ruby, who has been gone for over thirty years, to somehow save them all. Their hopes are dimmed when Ruby does come home, however, because she's quite changed. They can only hope that, with time, Ruby will be able to help. In the meantime, help comes from an unexpected source. A young woman named Persephone, a spirited TikToker, is quite intent on helping save Moonshyne Manor and who is also out to destroy the patriarchy.
The elderly witches are plagued with the aches and pains of growing older. Their magic is not what it used to be, but they still can wield it quite well.  Bianca Marais does a good job creating characters who are as diverse as they are interesting. I liked that these women didn't fit completely into that "grandmotherly" mold we so often see older woman cast in.
The novel moves between the past and present as the witches do what they can to come to terms with their past and to get out of their current predicament. I particularly liked reading about the women when they were younger and how their actions and choices tied into what was going on now. There is a heist, love, betrayal, revenge, greed, regrets, and the ever growing thirst for power. All of these things play a part in The Witches of Moonshyne Manor. Interspersed between chapters were recipes from the grimoire, which I found entertaining and a nice break between the story itself. Overall, I enjoyed The Witches of Moonshyne Manor, although I never felt fully connected to any of the characters. I cared about what happened to them and liked many of them, but there was something missing. At times I found this book funny and other times incredibly sad.

The seaside town of Freya Grove, New Jersey, was founded in 1871 during the boom of the nationwide spiritualist movement. ~ Opening of Witchful Thinking 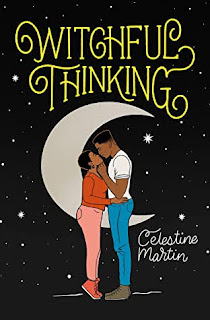 Witchful Thinking (Elemental #1) by Celestine Martin
Forever, 2022
Romance/Fantasy; 352 pgs
I went through a dry spell when I rarely read romance novels, and now I find myself gravitating towards them more and more. It wasn't just the romance of this novel though that drew me to it. It had a lot to do with the "witch" part too. I have a soft spot for anything witchy.  While magic does not play a large part in this novel, it is there and I liked how naturally it was interwoven into the novel.
This was such a fun read. I loved everything about this second chance romance. Freya Grove is a mystic cozy seaside town where magic and magical beings are out in the open. Lucinda Caraway is a high school history teacher and witch. She reads tea leaves at night and loves to garden. She's happy with her life. Mostly. When the opportunity arises to use a wish spell, Lucy, against her better judgement, takes a chance and says yes. That yes turns into quite a few yeses. When she accidentally sends in a fake bio for her upcoming reunion, all those things she mentioned seem to be coming true. She is suddenly taking risks she normally wouldn't, including helping her high school crush, Alexander Dwyer.
Alex is a merman and award winning photographer who does not believe in putting down roots. He travels the world and never stays in one place too long. He almost did. Once. And it turned out to be a mistake. He won't make the same mistake again. But then, his parents buy him a house and he runs into his old flame, Lucy. He's still determined not to stay, but it's getting harder not to want to.
I loved Alex and Lucy together. Their romance is one that takes time developing as each of them struggle with admitting their feelings even to themselves because of their conflicting plans for their own futures. It was something they each needed to work through and come to terms with. Oh, and Adam's house! It was like a character of its own in a way. I would not have minded the side characters having been more fleshed out, but I imagine that will happen in future books in the series--which I very much look forward to.