Bookish Mewsings: After the Flood by Kassandra Montag & I Could Use a Reading Day 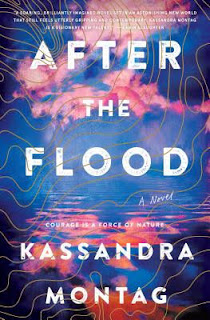 After the Flood by Kassandra Montag
William Morrow, 2019
Fiction; 432 pgs


Children think we make them, but we don't. They exist somewhere else, before us, before time. They come into the world and make us. They make us by breaking us first.


A bullet splintered the trunk next to my head. I didn't turn to look; I broke into a run.

My thoughts:
A century or so from now, floodwaters have overtaken much of the land. Coastal cities and even the much of the inlands are covered in water. People have been forced to take to the water, living on boats or in small mountain towns, the only landmasses left behind. Myra and her family had been living in Nebraska when the floodwaters came. When her husband takes off with their young daughter, Row, a pregnant Myra is heart-broken. Along with her grandfather, Myra and her youngest daughter Pearl go in search of Row—a mission that seems fruitless at the best of times. Seven years later, Mrya hears a rumor that her oldest daughter may still be alive, reigniting Myra’s determination to find and rescue her. Avoiding the raiders who steal, rape and murder is no easy task. Myra reluctantly joins forces with a group of other travelers who are seeking out a place to form a community when there seems no other choice. Life has taught her to trust no one, even the kindness of strangers.

Earlier this week news headlines read: "UN Report on Earth's Oceans Confirms The Catastrophe Is Already Unfolding Around Us":


Hundred-year floods will become an annual occurrence by 2050 in some cities and small island nations, according to the IPCC. Several of those cities are in the United States, including its second largest, Los Angeles.

It makes novels like After the Flood all the more frightening. Such a seemingly worst cast scenario and impossible idea does not seem all that far-fetched after all.

Initially I found myself having to take the occasional break from this novel because of the apparent hopelessness of Myra’s and Pearl’s situation. Kassandra Montag’s world seems so real and vivid. I loved Pearl’s wild-ness, spirit, and her unique take on life. Myra is fierce and protective. She has had to numb herself to the anger, desperation, and pain of the past and the present in order to survive—and keep Pearl alive. She is tough and hard. She is teaching Pearl to be the same, including how to best survive in their current environment. It was impossible not to feel for both Myra and Pearl. I admired Myra for her strength and fortitude and could relate to her need and desire to protect her children. But at what cost? Was Myra’s obsession with finding her lost child causing her to overlook the child she had in her care? And what do we lose when we close ourselves off emotionally? I did not always agree with Myra’s choices, but I could understand why she made them. And as much as I wanted to reach through the pages and give Pearl a hug, I imagine she would not have found it comforting.

As the novel is written from the perspective of Myra, the reader has a limited view into most of the other characters lives, which is the cost of a first person narrative. I think this novel was best told in that perspective, however, I would not have minded more of a glimpse into their lives as well. Each of those characters has their own story and has found a way to survive, both emotionally and physically in this world they now live in.  But then, it was not really their story.

After the Flood was an interesting mix of literary fiction and suspense. While at moments in the beginning I thought of McCarty’s The Road, by the middle I was thinking of The Walking Dead (but this one without the zombies). Of course, After the Flood is its own book and completely different—don’t let my comparisons fool you. Overall, I enjoyed After the Flood quite a bit.


Does this sound like something you would enjoy reading? Have you read After the Flood?

Have you ever wished that there were official government bookish holidays, and that, by law, employers HAD to give their workers a paid day off? If so, what kind of bookish holiday would you like to have?


My employer would probably argue that I do receive paid vacation and can use those days however I want, including as reading days. I know not everyone is so lucky. Now, if we did have a mandated reading for leisure day, I wouldn't argue with that. It would give me an excuse to spend the day with my books without the guilt of all the usual work and life obligations hanging over my head. Maybe. Although, if it was a national holiday, it would mean school would be out and the chances of me being able to read all day (or even half a day) would be slim. Seriously though, I often wish there were more hours in a day for reading. And for blogging, for that matter.