I am linking up to the Sunday Post hosted by Kim of Caffeinated Book Reviewer, where participants recap our week, talk about what we are reading, share any new books that have come our way, and whatever else we want to talk about. I am also linking The Sunday Salon hosted by Deb Nance of Readerbuzz where participants discuss what they are reading and other bookish topics. I am linking up to Nicole of Feed Your Addiction's Monthly Wrap-Up Post, where any book bloggers who write monthly wrap-up posts can link up and visit other bloggers to see what they have been reading.

Happy September! I hope those in Dorian's path are staying safe. A fire broke out not too far from one of my relative's house here in Southern California late this past week, which had us worried. Some of the schools were closed today (Friday) due to the smoke. My daughter's school was not affected, thankfully. With the winds, we have been getting it could have been much worse. Hopefully the firefighters will have it completely under control soon. I hope your September has gotten off to a good start.

What I Am Reading: I recently finished reading a Dystopian novel by Kassandra Montag, After the Flood, which had me hugging my daughter a little tighter with each turn of the page. I am now reading The Taken by Vicki Pettersson, the first in her Celestial Blues series. A friend talked me into giving it a try--which wasn't hard because I do enjoy these types of novels. A mystery with a splash of romance and a supernatural element. How could I say no? Besides, I had a copy on my TBR pile already. I am thinking of starting Jen DeLuca's Well Met next, which comes highly recommended by Suzanne of The Bookish Libra. 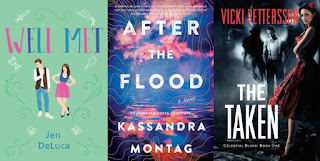 What I Am Watching: My daughter and I are hooked on Netflix's series Free Rein. It is about a teen who, along with her mother and sister move to an island off the coast of England. The teen bonds with a horse with a dark past. It's a cute show.

I discovered Shadowhunters on Hulu. I have only read the first book in the Mortal Instruments series, City of Bones, by Cassandra Clare, and while I liked it, I haven't worked up the interest to read further in the series. I think the movie kind of ruined it for me (the movie was awful). I was curious how the show would turn out though. I am in the middle of the second season at the moment. 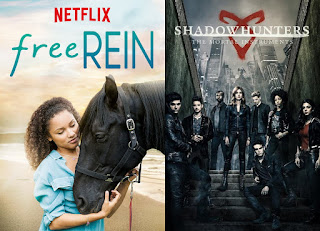 Off the Blog: I am still trying to accept we are a week into September. August went by so fast. With it came the start of school for Mouse and my new work schedule (which I am still trying to adjust to). The new dance season is underway. Mouse is taking pre-pointe classes along with her other dance classes. She was so excited when she received her pre-pointe acceptance letter the end of July. Mouse auditioned for the dance studio's annual Nutcracker ballet the week before last. Rehearsals begin this weekend. The new Girl Scout season kicked off the end of August as well. We ended August with a potluck barbecue and viewing of the summer performances on video with some of our dance friends, which was fun. They set up a giant projector screen in their backyard, and we gathered around to watch once the sun set.  I am just glad there were a couple of my husband's caramel soaked brownies left I could enjoy at home! 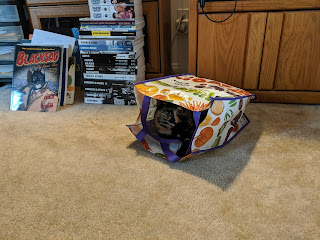 Nina in the bag

What I Am Looking Forward To: Popping Sleepless in Seattle in the DVD player, box of tissues nearby, and enjoying a little Dairy Queen in honor of my birthday this weekend. The coming of fall. Cooler weather at some point. Hopefully, anyway. It would be nice to open the windows in the evenings again. And settling more into a routine in the next week or so.


I feel satisfied with my reading this past month. Every book hit the spot just as it was meant to. I really enjoyed my August TBR Poll winner, The Bookish Life of Nina Hill--so thank you to all who voted for it! I finally finished listening to the audio of Warcross. It's a great book. I just wish I was better at making time for audiobooks. My favorite read of the month was Sweep of the Blade by Ilona Andrews. No surprise there given how much I love the series.

I was fairly consistent with my blogging in August. I do need to make time for review writing sometime soon. I am still playing catch up. Thank you to everyone who visits and/or takes the time to comment! I appreciate you all very much.

Tell me what you have been up to! What are you reading, listening to and watching? How was your August? Do you have anything planned for this month?


When considering what books to add to this month's poll, I kept coming back to these three. They seem like perfect fall reads, and I don't think I can go wrong with any of them. But which one should I start with?! I cannot decide and could use your help . . . 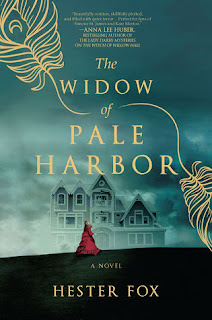 The Widow of Pale Harbor by Hester Fox

A town gripped by fear. A woman accused of witchcraft. Who can save Pale Harbor from itself?

Maine, 1846. Gabriel Stone is desperate to escape the ghosts that haunt him in Massachusetts after his wife’s death, so he moves to Maine, taking a position as a minister in the remote village of Pale Harbor.

But not all is as it seems in the sleepy town. Strange, unsettling things have been happening, and the townspeople claim that only one person can be responsible: Sophronia Carver, a reclusive widow who lives with a spinster maid in the eerie Castle Carver. Sophronia must be a witch, and she almost certainly killed her husband.
As the incidents escalate, one thing becomes clear: they are the work of a twisted person inspired by the wildly popular stories of Mr. Edgar Allan Poe. And Gabriel must find answers, or Pale Harbor will suffer a fate worthy of Poe’s darkest tales. [Goodreads Summary]