Bookish Thoughts: How We Disappeared by Jing-Jing Lee

She began in the first month of the lunar year. ~ Opening of How We Disappeared 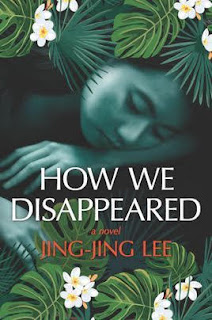 How We Disappeared by Jing-Jing Lee

Weaving together two time lines and two very big secrets, this stunning debut opens a window on a little-known period of history, revealing the strength and bravery shown by numerous women in the face of terrible cruelty. Drawing in part on her family’s experiences, Jing-Jing Lee has crafted a profoundly moving, unforgettable novel about human resilience, the bonds of family and the courage it takes to confront the past.

I am full of feelings right now, having just finished Jing-Jing Lee's How We Disappeared. I knew the moment I first read a description of this book, I had to read it.

The chapters alternate between the stories of twelve-year-old Kevin, as he uncovers his grandmother's long held secret, and Wang Di as she reflects and comes to terms with her past.

"'Listen. Do what helps you. If hoping helps you survive from day to day, then keep hoping that they're going to release you. The truth is, I've never seen them let anyone go. But if it helps you.'" [Excerpt from How We Disappeared]

Wang Di was the oldest child and only daughter of her family. When the Japanese marched into Singapore, they wielded their power cruelly and viciously, gunning down entire villages and kidnapping young girls and women, among other reprehensible actions. At sixteen, Wang Di was forced to be a sex slave for Japanese soldiers. She was one of many, trapped in a life she never asked for. Their living conditions were abysmal and their future uncertain. Despite everything, the shame she felt and the pain she endured, Wang Di found the strength to survive--to persevere.

The reception the "comfort women" received upon their return home after the war ended was anything but welcoming. While Wang Di was welcomed back into her parents' home, she was still an outcast. Other women were not so fortunate, being turned out and shunned. Shame and grief were carried on all sides. The families of these unfortunate women did not understand or want to acknowledge what the girls had suffered through. And the victims themselves felt ashamed and ruined, afraid to discuss what had happened to them. It just wasn't talked about--and still isn't in many circles. Just think of the stigma surrounding rape victims today.

Now a widow, Wang Di has many regrets, one of which is not listening to her husband's stories about his time during the war and in not sharing her own story with him while he was alive. For years she refused to listen or talk about the war, not wanting to relive it, at least not out loud. She suffered in silence.

I realized then, what she meant to say, so for the rest of the time I was in her flat, I made sure not to look away from her so that she would know she didn't have anything to be ashamed about. [Excerpt from How We Disappeared]

Sometimes it was easy to forget Kevin is only twelve-years-old given how tenacious and thoughtful he could be. He loved his grandmother dearly and when she confesses to him a rather big secret on her deathbed, he knows he cannot just let it go. On his own, he sets out to discover the truth, hoping it will bring some solace to his grieving father.

I came to love both Kevin and Wang Di's through their stories. Often in dual narratives, one side is stronger than the other, but Jing-Jing Lee has found the perfect balance between the voices of her characters. Through Wang Di and Kevin, the reader is introduced to other significant characters, including Wang Di's husband and Kevin's parents. Also the amazingly strong women Wang Di was with during her captivity. I was sad to see the novel come to an end, wanting to spend more time with the characters, and yet also satisfied that their stories had come to a conclusion--at least as far as the author meant to take us.

I have read a lot of novels set during World War II, but so few that focus on the Pacific (my own fault, and I am trying to remedy that). How We Disappeared is a poignant novel, which focuses on a part of history that has too often been buried that we all need to remember. And not just for the horrors produced so we do not repeat them--although that is important--but also to remember the victims and survivors, of their strength and perseverance, and to give them a voice so they are no longer kept silent.

How We Disappeared is a beautiful and heart-wrenching novel that had me in tears more than once--in sadness and anger, but also in hope and joy; devastating and yet filled with heart. This is my absolute favorite book that I have read so far this year.


For more information about the author and her work, visit her website. You can also find her on Twitter.