The first thing Nika noticed about the man who buzzed the studio bell was his scar.  ~ Opening of Stars Uncharted 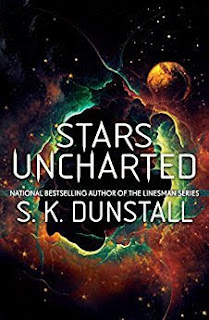 
I do not know what it is about the coming together of a misfit or ragtag group of people that is so irresistible. It is a trope that never gets old. At least not for this reader. Stars Uncharted is one such novel, and what an adventure it turned out to be! It made me want to stock my bookshelves with more science fiction of the space opera variety.

The reader is first introduced to Nika Rik Terri, a body-modification artist at the top of her field. She is known for being innovative and is well respected. She takes great pride in her work and her business. The only sore point for her is being tied to a mafia-like space company that often calls upon her services to help cover up their dirty work. As a result, her latest client’s intentions are far from above board, and Nika flees in fear of her life, picking up an inexperienced body modder along the way—much to his dismay. Snow never asked for his life to be upturned so suddenly—especially by Nika, whose true identity he does not know.

Meanwhile, on the cargo ship The Road to the Goberlings, Captain Hammond Roystan, and his crew happen upon a sight they never expected to see. The great exploration ship Hassim is not only disabled, floating in space, but appears to be unmanned. It is a huge find given the wealth of information stored in the Hassim’s databanks about the various worlds the ship has visited. Junior engineer Josune Arriola is the most recent addition to Roystan’s crew and her knowledge of the Hassim raise the captain’s suspicions. With an enemy who will stop at nothing to gain the secrets of the Hassim, Roystan and his crew are forced to go on the run and stay ahead of those who want them dead.

As Nika and Snow are trying to avoid being discovered, Roystan and his crew are attempting to repair their ship and make a hasty retreat before their enemy can catch up with them. Roystan agrees to take on Nika and Snow, all of them desperate and in need of what the other can offer.

I was hooked on Stars Uncharted from the very first page. I found myself thinking of the characters even when I was not reading, wondering what they were up to. Nika and Josune are very different and yet both resourceful, intelligent and women I would want on my side in a fight. For me, they made the novel. I also really liked Captain Roystan. It is obvious he a good leader who respects his crew. I liked how the relationships between the characters seemed to grow naturally, their coming to trust each other and depend on each other, especially given their circumstances and their hidden pasts. Even with Snow, who I wasn’t a huge fan of in the beginning, but came to respect as the novel went on.

Not too surprisingly, the world the authors created has a dystopian feel, where the wealthy corporations have the upper hand and everyone else does what they can to eke out a living and survive. I saw mention here and there that hard core science fiction fans might find the technical aspects of the book lacking. I have not read enough science fiction to say one way or the other. All I know is that I really enjoyed all aspects of the novel. Stars Uncharted was right up my alley. Great well-developed characters I connected with, fast paced action, and interesting storylines, including the main plot. I hated for Stars Uncharted to come to an end and am eager to read Stars Beyond when it comes out next year.

For more information about this sister writing team and their work, visit her website. You can also find them on Twitter.