"Well, my prince, Genoa and Lucca are no no more than possessions, estates, of the Buonaparte family." ~ War and Peace by Leo Tolstoy 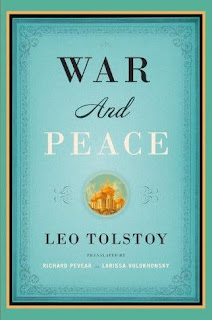 After several false starts in past years, I am happy to say this time it stuck. I finished Leo Tolstoy’s War and Peace earlier this month. I feel such a sense of relief accomplishment. I loved the author’s Anna Karenina, and it was enough to convince me to give War and Peace a try. I just kept getting stumped whenever I would pick it up. I tried the read-along route and reading it on my own, both to no avail. That was, at least, until this year when I heard about another read-along and decided to try again. I am not sure if anyone else actually read the book, to be honest. No one (not even me) ever commented in the group where the read-along took place other than the posted schedule and a few people saying they would join in. I seem to have mixed results with read-alongs in general, and so I suppose that’s just par for the course.

Although I cannot remember who or in reference to what book (maybe this one), I took the advice to heart that I should keep reading despite not being able to keep the characters straight because everyone and everything would eventually fall in place. And it worked! Some other advice that I know now which I wish I had known in advance was that maybe I should have skipped reading the second part of the epilogue. Chance are I would have read it anyway, but at least I would have been more prepared for it. When I finished, I found myself wondering, “That’s it? That’s how it ends?” Tolstoy writes about how history is formed and how it progresses, how individuals affect that progress, and the nature of modern history and its flaws. For the characters, the ending came in the first part of the epilogue really, and had more of an “ending” feel to it.

It is true that Tolstoy often would step away from his characters in the novel and talk about politics, culture, historical events, and share his philosophical views, all which provides an interesting framework for the book. I enjoyed reading about the war effort, the strategies and battle plans, as well as the ideologies of the time. Rarely did I find it boring. The parts of the book I particularly was drawn to involved the characters, seeing their own stories unfold and what fate held for them.

Like my other recent read, Les Misérables, War and Peace is full of characters whose lives are intertwined in one way or the other. I had no real idea what War and Peace was about when I started it, having never seen it in any of its screen adaptations, nor had I read much about it. I knew it was well loved by many, as well as a book many others were on the fence about tackling. I am so glad I read past that point that always seemed to get me stuck. I am glad I took the time to give this book another chance. Tolstoy’s writing could be a bit dry at times and repetitive—something in the translation or the writing style, perhaps. And yet, I was still drawn to the book and to the characters. Set during the Napoleonic invasion of Russia in 1812, the novel follows five aristocratic families and their friends as they navigate their lives during the war. We meet character who range from peasant to nobility, as well as soldiers of various ranks to civilians. The novel is rich in culture and history, and I found myself researching some of what Tolstoy mentions to find out more.

One of the stand out characters is Pierre Bezukhov, who was among my favorite characters. He, and many others around him, are surprised when he inherits his father’s fortune. Pierre is the illegitimate son of a count. He goes from a socially awkward outsider to being one of the most desirable, if still socially awkward, bachelors. His new found popularity and fortune only serve to make him feel more unsteady and unsure of himself. Pierre is a rather simple man who does not share the pretentiousness that so many of the upper class seem to. He is emotional more than he is rational, particularly at first. Throughout the novel, Pierre is on a sort of spiritual quest, searching for some higher meaning and trying to find his place in the world. His wife Helene is the opposite of him, shallow and an opportunist. She is very popular, especially among the men.

While Pierre tends to be led by emotion, his good friend Andrei Bolkonsky is much more rational, and he uses his intelligence to his advantage. Andrei is not one that is easy to get close to as he sometimes seems to hold himself apart, but he is nothing if not honest, and puts his all into his work, whether it be managing his estate or on the field in battle.

Natalya (aka Natasha) Rostov is another character who is often front and center, and one I came to like quite a bit. She is both charming and somewhat naive. She did not always make the wisest of choices, letting her heart lead her on occasion. In some respects, she is on her own journey of self-discovery, much like Pierre. Natasha grows a lot over the course of the novel, experiencing both joys and pain, shaping her into the woman she will become.

There, are of course, other characters who Tolstoy lets the reader get to know at length. There is Sonya Rostov, another favorite of mine, who is the cousin of Natasha, and living with Natasha’s family as a ward. Sonya seems to have a level head and I often felt sorry for the way she was treated and the sacrifices she has to make toward the later part of the book given her station in life. There is also Andrei’s sister, Marya Bolkonsky, who long suffered under her father’s cruelty. I felt for Marya much of the time, although I did not like the way she treated Natasha in the beginning of their acquaintance. The list goes on from there.

It was hard not to be swept up into their lives: all their drama, hopes and dreams. It is said Tolstoy did not consider War and Peace a novel. It is definitely a mix of both story and essay, but interwoven so well that I cannot imagine one without the other. I will not even pretend that I know all that Tolstoy wanted to achieve with this book. I do not have the discerning eye of the scholar and am sure I missed much. There is war, romance, duels, betrayals, and misunderstandings between the pages of War and Peace. There are laugh out loud moments as well as ones that made my eyes well up with tears. Although a struggle at first, I ended up enjoying my (near) year reading War and Peace much more than I expected. Although I am not sure this is a book I will return to now that I have read it once through, I am anxious to see one or more of the screen adaptations of War and Peace.