In 1815, Charles Francois-Bienvenu Myriel was bishop of Digne. ~ Les Misérables 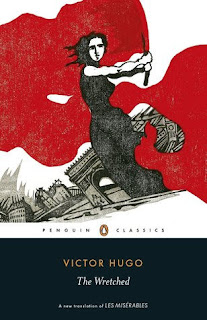 
I fell in love with the musical version of Les Misérables long before I actually saw it performed on stage. My teenage heart swelled with emotion as I belted out “I Dreamed a Dream” more times than I could count. When, as an adult, I finally was able to see the stage production, I cried as the music began, a projection of the title on the curtains. One summer during our college years, my husband-then-boyfriend and I decided to give the book a try. Neither one of us finished it. I liked the book quite a bit, I remember, but classes had resumed and the book had to be set aside. It would be over two decades before I would try again, this time determined to finish it. Nick's (One Catholic Life) Les Misérables Chapter-A-Day Read-Along provided the perfect opportunity to do so. How had I not known the book is written in 365 chapters, one for each day for a year? And so began my reading of Les Misérables.

I much prefer reading a book before seeing its screen or stage version Sometimes though, I do see the book performed on screen or stage before reading the book as was the case in this instance. Given how enamored I am with the musical, I was not sure what I would make of the book. I would be lying if I said I didn't have the soundtrack from the musical running through my head the entire time I was reading it. Even having seen the musical several times and knowing the story so well, I still found myself crying in spots, getting angry at particular characters, and even holding my breath a time or two in the more tense situations.

At its heart, Les Misérables is a novel about redemption and good overcoming bad. What makes it all the more richer is the author’s attention to detail and depth that he takes not only his characters, but also in his digressions with his own thoughts about the history, society, and the politics of the times. There was the occasion or two I found it a bit overwhelming. But in the main, I found Hugo’s writing very accessible, and I was caught up in his narrative. This was a very hard book to read just one chapter at a time, and I often would find myself reading several in one sitting not realizing I had read ahead.

I always find it intimidating to write about a classic novel. Whereas once I might have taken a more academic approach to my reading of the book, wanting to dissect it’s every nuance and theme, I am no longer that type of reader. And so you will not find a deep analysis of the book here, but rather just some general thoughts. Hugo takes on such bold themes as social misery and injustice, class division, and the internal struggles of such things as well as the inequalities. Les Misérables was a force of change during its time on the social and political front and, I believe, is still relatable today.

A big portion of the novel is narrated by the author as he weaves his own thoughts and lessons in history, culture and society hierarchies in with the stories of his characters. Being that I am a “character” reader, my favorite parts of the story tended to be when Hugo focused mostly on their comings and goings. Many of the themes conveyed in the novel can be seen in their individual and combined stories. Hugo does not leave much for coincidence in the novel, with so many of the characters and events being connected somehow, everyone and everything coming together again and again as if fated to be so. I loved that aspect of the novel. I was curious to see Hugo’s original portrayal of the characters I have come to love through song. Would I still like them? How different would they be?

In a departure from my usual review style – I am sharing some of my thoughts on the main characters (trying to avoid spoilers):

There are many other characters that get more than a passing mention in the novel as well, such as the bishop who comes to Valjean’s aide, Marius's father and grandfather, the Friends of the ABC and their leader, Enjolas, and Azelma, Eponine's sister, just to name a few. Hugo gives the reader a real sense of time and place through his characters as well as his own digressions. When I reached the end of the novel, I felt a bit out of sorts, like I was saying goodbye too soon to a longtime friend. It wasn’t because the ending left me wanting—it didn’t at all.

My family and I re-watched the movie musical version of Les Misérables this past weekend, and I was swept up by the music and songs once again. I appreciate how the musical (and hopefully the upcoming mini-series by Masterpiece Theater) captures the general essence of the book even if not all the details are the same or even present. Now that I have the book in my head, I could not help but fill in the missing backstories as I watched, wanting to explain to everyone watching what they could not know. I did not. Well, maybe a little. Yes, it’s true. I am that annoying person you want to avoid watching a movie with if I have just finished the book the movie is based on.

I tend to gravitate more these days towards books that are fast-paced because it matches my busy life. But Les Misérables is definitely a book that needs deserves to be savored. I imagine a lot of people are turned off by the size of the novel at 1,400+ pages. I know I was. I am so glad though that I stepped out of my busy life to take the year to read Hugo’s classic. It was well worth it. 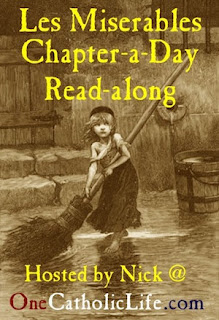