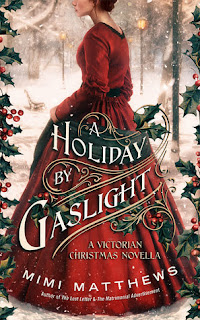 An icy late November breeze rustled the bare branches of the tree along the Serpentine.~ Opening of A Christmas by Gaslight

Sophie Appersett would like to marry someone for love, and that doesn't seem to be Mr. Edward Sharpe, who barely speaks to Sophie on their outings together. Sophie's parents need her to marry Edward, who is quite wealthy despite his humble parentage, as her father's spending has gotten out of hand. While, Sophie wants to marry for love, not out of obligation, her loyalty to her family is strong. Will the holiday at the Appersett House be enough win over Edward Sharpe?

A Holiday by Gaslight was a pleasant little historical romance set in Victorian England. Sophie has long been driven by pragmatism and logic, but when it comes to marriage, she craves romance and love. She seems to know this about herself and isn't afraid to go after what she wants. At first I was a little put off by Edward Sharpe, much like Sophie was, given his initial demeanor, but, as the reader soon learns, there is much more to him than meets the eye. He is smart, and I worried at times that Sophie was underestimating him.

I am not sure what to make of how things played out in the end. It was certainly a twist I was not expecting. Was it for the better? I think so for Edward and Sophie. For the reader? It may have been a bit too much. Still, I did enjoy this novella overall, and would read more by Mimi Matthews. 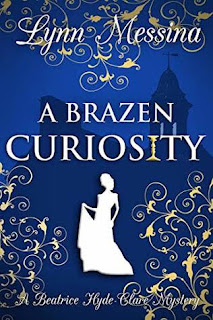 All through dinner Miss Beatrice Hyde-Clare imagined tossing food at Damien Matlock, Duke of Kesgrave. ~ Opening of A Brazen Curiosity

Beatrice is a heroine after my own heart. Shy and bookish, more invisible than not, Beatrice Hyde-Clare was taken in by relatives at a young age after her parents' untimely death. She is now 26 years old with no marriage prospects in sight--nor necessarily expected. While visiting her aunt's childhood friend and her family, Beatrice stumbles on the dead body of one of the other guests while searching for a book in the library. Also in the room is the insufferable Duke of Kesgrave. After shooing her off to bed to maintain propriety, the duke promises to take care of everything. Beatrice is shocked and none to happy to discover the Duke of Kesgrave has not been too honest about the situation. As a result, she sets out to find a murderer.

I had such fun reading A Brazen Curiosity, my first by Lynn Messina, but definitely not my last. Beatrice is not only smart, but she is also a character I found I could really relate to. Someone who is used to always doing the right thing, never stepping out of line, and yet ever observant. Like for Bea, the Duke of Kesgrave grew on me the more I got to know him. While there is no romantic match in this book for the two characters, I wouldn't mind seeing it in the future. They work well together, and I enjoyed their sometimes barbed and often playful banter. Some of the side characters in this novel are real dunces, I have to say. How anyone would so readily accept a man hit on the back of the head with a candlestick as a suicide, I do not know, but I suppose people will believe what they want to believe. Even so, this is a great little mystery and I am eager to read more in the series. 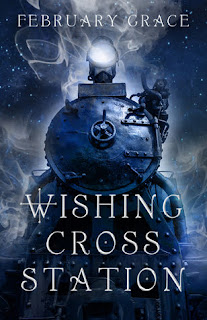 The wail and cry of the whistle. ~ Opening of Wishing Cross Station

Upon collecting boxes of donated books for the college library he works for, Keigan Wainwright comes into possession of a particularly unusual book. One whose province is quite the mystery.  Promising to return it to its rightful place, Keigan takes on more than he bargained for. He suddenly finds himself back in time, stuck in a small town whose residents do not like strangers, and losing his heart to a young woman he knows he has no future with.

Such an interesting premise! I could not resist the mention of books, especially one so unusual that might be a key to time travel. Although more of a novella in length, the author does a good job of setting up her character of Keigan and the task he is about to undertake. Keigan seems like a decent chap and adjusts rather easily to life in the mid-1800's. He is not sure how long he will be stuck there, although likely through Christmas, but he is resourceful enough to know getting a job and a place to stay are critical. This is more of a quiet story than I expected and a rather sad one at that. I would like to have known more about Marigold, the girl from the past. Mr. Best, the jeweler, made quite an impression on me, and was probably my favorite character in the novel. I guess you could say Wishing Cross Station is a bit of a mystery as well as a love story. I do wish there had been more to it in the end. This is a story which deserves a full length book.