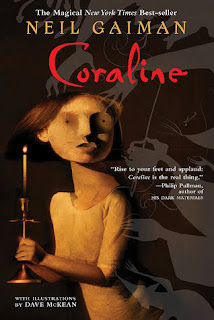 
The day after they moved in, Coraline went exploring....

In Coraline's family's new flat are twenty-one windows and fourteen doors. Thirteen of the doors open and close.

The fourteenth is locked, and on the other side is only a brick wall, until the day Coraline unlocks the door to find a passage to another flat in another house just like her own.

At first, things seem marvelous in the other flat. The food is better. The toy box is filled with wind-up angels that flutter around the bedroom, books whose pictures writhe and crawl and shimmer, little dinosaur skulls that chatter their teeth. But there's another mother, and another father, and they want Coraline to stay with them and be their little girl. They want to change her and never let her go.

Other children are trapped there as well, lost souls behind the mirrors. Coraline is their only hope of rescue. She will have to fight with all her wits and all the tools she can find if she is to save the lost children, her ordinary life, and herself. [Goodreads Summary]

Why I want to read this one: I have long wanted to read this book, and it has been sitting on my shelf for years now. I have loved everything I have read by Gaiman so far and this sounds like such a fun creepy read. My daughter tried to watch the movie once and got scared so didn't finish it. She wants me to hurry up and read the book so she can try the movie again, this time with me. 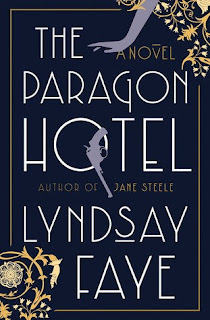 
The new and exciting historical thriller by Lyndsay Faye, author of Edgar-nominated Jane Steele and Gods of Gotham, which follows Alice “Nobody” from Prohibition-era Harlem to Portland’s the Paragon Hotel.

The year is 1921, and “Nobody” Alice James is on a cross-country train, carrying a bullet wound and fleeing for her life following an illicit drug and liquor deal gone horribly wrong. Desperate to get as far away as possible from New York City and those who want her dead, she has her sights set on Oregon: a distant frontier that seems the end of the line.

She befriends Max, a black Pullman porter who reminds her achingly of Harlem, who leads Alice to the Paragon Hotel upon arrival in Portland. Her unlikely sanctuary turns out to be the only all-black hotel in the city, and its lodgers seem unduly terrified of a white woman on the premises. But as she meets the churlish Dr. Pendleton, the stately Mavereen, and the unforgettable club chanteuse Blossom Fontaine, she begins to understand the reason for their dread. The Ku Klux Klan has arrived in Portland in fearful numbers–burning crosses, inciting violence, electing officials, and brutalizing blacks. And only Alice, along with her new “family” of Paragon residents, are willing to search for a missing mulatto child who has mysteriously vanished into the Oregon woods.

Why was “Nobody” Alice James forced to escape Harlem? Why do the Paragon’s denizens live in fear–and what other sins are they hiding? Where did the orphaned child who went missing from the hotel, Davy Lee, come from in the first place? And, perhaps most important, why does Blossom DuBois seem to be at the very center of this tangled web? [Goodreads Summary]

Why I want to read this: After reading and falling in love with Jane Steele, I will read anything Lyndsay Faye writes. It helps that this book sounds really good too! A bit of history mixed in a thriller? I must read this one! 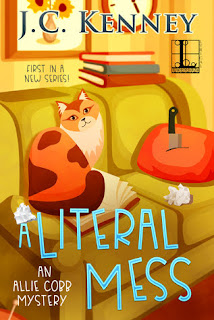 
The first book in a new series featuring Allie Cobb brings the New York literary agent back to her Hoosier home town where a mysterious death keeps everyone on spoiler alert...

Allie Cobb left home for the literary circles of Manhattan to make her name out from under the shadow of her legendary father. Now his death brings her and her rescue cat Ursula back to the southern Indiana town of Rushing Creek, population: 3,216. But a tragic new chapter hits the presses when the body of her father’s hard-drinking, #1 bestselling client is found under the historic town bridge. The local police suspect foul play and their prime candidate for murder is the author’s daughter—Allie’s longtime friend.

Determined to clear her bestie, Allie goes into fact-checking amateur detective mode while trying to ignore the usual rumormongers. Those with means, motive, and opportunity include the vic’s ex-wife, his rejected girlfriend, the mayor, and a rival agent trying to mooch clients. With a rugged genealogist distracting her and the imminent Fall Festival about to send tourists descending on their once-peaceful hamlet, Allie needs to stay alive long enough to get a read on a killer ready to close the book on a new victim: Allie . . . [Goodreads Summary]


Why I want to read this: It's hard to resist a cozy featuring anyone in a profession related to books. And I definitely can't resist a cat named Ursula.