The ringing of the phone jerked me from my sleep. ~ Opening of Magic Slays 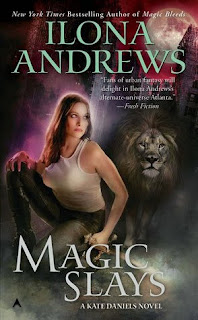 It has been too long since I last read a Kate Daniels' novel. Way too long. I admit I felt a little lost at first, but soon found my footing again. Oh, how I love this series! Kate is trying to get her private detective agency off the ground, but without much success. It doesn't help that her mate is the Beast Lord, Curran, whose bad side no one wants to get on. When a call comes in from Atlanta's premier Master of the Dead, Kate's is wary. He needs her help catching a vampire who is on the loose. And then another client walks through her door--an unexpected client whose business Kate sorely needs. Kate takes the case despite the reservations of her friend and new-hire Andrea. Faced with a major threat to all those who possess magic, Kate is working against the clock to save the imperfect world they live in. It means bringing together groups of people who would rather see each other dead. Will she be able to pull it off?

The reader gets more of a glimpse into Kate's backstory, particularly of her mother and father's relationship. It sheds a lot of light into how Kate became the Kate we know today. We also see more of Julie in this fifth book in the series, and her story line is particularly heartbreaking. It's yet another example of the messed up world the characters in the series live in.

I am a big fan of Kate and Curran as a couple. The two have such good chemistry. And although Kate still sometimes doubts Curran's  true feelings for her (can we blame her with her past?), he does seem to really love her and is willing to support in her in (just about) anything. Kate is not a woman who needs to rely on a man for survival though, which is something I love about her character.

Magic Slays was a good reminder of why I fell in love with this series in the first place. It is intense, full of action, witty and a page turner. There were some definite sad moments, a few revelations, and occasional sighs of relief. Things really heat up for the characters, and it was good to see so many come together in this one. I will not be waiting so long to read the next in the series. Not after the ending in this one.


For more information about the husband and wife writing team, Ilona Andrews, and their books, visit their website. You can also find them on Facebook.