I know what to expect when I pick up one of the books in this series. The couples are fated to be together, and so that big spark or zing when they first touch and their immediate attraction and devotion to each other is something I know will come early on. I am not a huge fan of instalove, but I can overlook it from time to time. And while these books will likely never be five star books for me, there is just something about them that keeps me coming back. I like the world building and the time traveling, there’s always a dash of humor mixed in, not to mention Grandmother Sinclair is just a hoot. They are fun reads, and sometimes that’s exactly what I need. 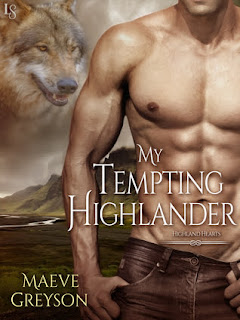 Opening Sentence: Ronan shifted in the saddle, wishing for the thousandth time his heritage had been different.

Of all the books in Maeve Greyson’s Highland Hearts series, this third book was the one I was most looking forward to. Given Ronan Sutherland was kind of the bad guy in the book before it and is now the hero, I suppose that might be a bit surprising. I generally do not think much of men conduct themselves the way he did in the previous book in the series. Still, I was curious, and given Ronan’s situation, the curse and the prophecy which would lead to him breaking it, I was willing to give him a second chance. He’s much more likeable this time around. Mairi and her twin sister are all that remain of the Sinclairs in present time Scotland. Their sisters have all traveled back in time to make their homes with their destined true loves. Mairi Sinclair, however, stubbornly refuses to join her sisters and grandmother in the past. Ronan,who is intent on breaking the curse, steps into the future (our present) with the help of the elder Sinclair to woo the woman he is destined to be with, and talk her into returning with him to the 13th century.

All of the Sinclair sisters are blessed with a gift, and Mairi’s gift is being able to heal. Chieftain Ronan, on the other hand, is cursed. He is a shapeshifter with the ability to change from man to wolf. A part of that curse also touches his mother who has lived her life in wolf form for hundreds of years and Ronan’s advisor and friend who is tied to the water as a dragon. Ronan does not want to burden Mairi with the truth initially, afraid it will turn her away from him. Mairi, on the other hand, values truth above all else, and does not trust any man who is not honest with her. You can imagine where the conflict between them will come in as a result, I am sure. Not to mention the fact that Mairi really does not want to give up her modern lifestyle. Ronan and Mairi are well matched—both a bit hard headed and stubborn. Ronan is very traditional in some respects, which can be expected due to his age, although I appreciated how much he respects Mairi and her opinions and choices. Mairi struggles more than he does in terms of accepting that she’s fallen for him.

Overall, I enjoyed My Tempting Highlander. Breaking the curse doesn’t prove to be as simple as Mairi and Ronan falling in love or even tying the knot, of course. Greyson never makes it that easy for her characters. I liked the way everything came together in the end—a bit of action and suspense mixed in with the romance is always a welcome addition. 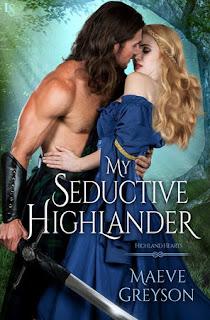 
Lilia Sinclair is the last of the Sinclair sisters remaining in the twenty-first century. Her sisters and grandmother have made their homes in the 13th Century Highlands. Lilia’s future is not in the past, however. Like her sisters, Lilia has a special magical gift, and Lilia has often seen hers more as a curse. She is an empath with the ability to pick up on the feelings of those around her. She has learned to shield herself for the most part, and will not let herself get close to just anyone. She has two close friends who are very protective of her. When one of grandmother’s visions leads to her sending Graham MacTavish, once cursed in dragon form, forward into the present, Lilia is suspicious of the purpose. She is not going to go back with him no matter what he does to try and convince her. However, Graham has no intention of returning home. He knows that if he does, his life will be forfeit. He had gotten into a bit of trouble with the leader of another clan who wants his head. Graham is accompanied by Angus, who is a bit provides a bit of added comedy, intentionally or not, as the two Highlanders adjust to being in modern day Edinburgh. Graham has been sent to take his place by Lilia’s side and provide her emotional support, especially as Lilia’s longtime friend and caretaker is dying. Eliza has been with the family all their lives, her own history tied to the Sinclairs. She also happens to be a distant relative of Graham’s.


I loved that the three friends do Live Action Role Playing of medieval times. It especially seems fitting given Lilia’s background and family ties to that time period. She’s quite skilled on a horse and with a sword as Graham quickly discovers. I wasn’t sure I would like Graham at first given his history of womanizing (something I am not a fan of in my romance heroes), but he proved to be a pretty nice guy. I really liked Lilia. The two complement each other well.

Graham never expected to lose his heart to anyone, but he knows without doubt that he has met his soulmate when he comes across Lilia. Lilia is reluctant to open her heart to Graham, unsure whether she can trust him—and his motives. There is not much of a struggle in terms of the two finally coming together, which was kind of nice. The real conflict in the novel comes when Lilia decides to return to the 13th century to scatter Eliza’s ashes. Graham insists on going with her, despite the threat of death on his return. What follows is an intense few chapters as the danger level rises, hostages are taken, a chase ensues, and blood is spilled. Add to that an epilogue which had me tearing up. In some ways, this was probably my favorite in the series. From the characters, to the suspense, the comedy and the overall story line. It seems a fitting end to the series.