My momma believes all babies to be gifts from God, no matter what. ~ Opening of My Sweet Vidalia 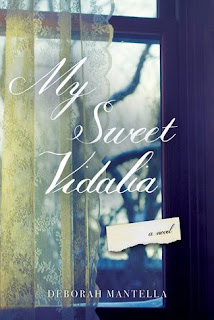 On July 4, 1955, in rural Georgia, an act of violence threatens the life of Vidalia Lee Kandal's pre-born daughter. Despite the direst of circumstances, the spirit of the lost child refuses to leave her ill-equipped young mother's side.

For as long as she is needed―through troubled pregnancies, through poverty, through spousal abuse and agonizing betrayals―Cieli Mae, the determined spirit child, narrates their journey. Serving as a safe place and sounding board for Vidalia's innermost thoughts and confusions, lending a strength to her momma's emerging voice, Cieli Mae provides her own special brand of comfort and encouragement, all the while honoring the restrictions imposed by her otherworldly status.

Vidalia finds further support in such unlikely townsfolk and relations as Doc Feldman, Gamma Gert and her Wild Women of God, and, most particularly, in Ruby Pearl Banks, the kind, courageous church lady, who has suffered her own share of heartache in their small Southern town of yesteryear's prejudices and presumptions.

I was drawn to this novel because of the setting and the description: set in the South in the 1950's, it is a novel about a woman living a hard life. Vidalia Lee Kandal is kindhearted. She got good grades in school, but was a bit of an outcast. It made her easy prey for the likes of JB, a man with his own insecurities and leanings toward cruelty. The two eventually marry and Vidalia remains faithful to him despite emotional and physical abuse he heaps on her.

Domestic violence is an extremely important topic that deserves attention and needs to be talked about. The author does a good job of presenting a very realistic glimpse into the life of a victim of domestic violence. Although the novel takes place over sixty years ago, it could very well represent some situations today, sad to say. The times certainly played their part though. My heart ached for sweet Vidalia, who remains amazingly good-hearted despite everything, but even more so for her children. You have the people who help in limited ways: the doctor, the women from the local churches, and other townsfolk. It would be easy to wish Vidalia had left JB early on (I know I did), but nothing is every that simple, especially in a relationship involving domestic violence.

I had no sympathy or even empathy for JB. He is a despicable character. There was nothing good about him, no glimmer of remorse, or a kinder side to him. Although his mother annoyed me much of the time, I could understand where she was coming from. She loved her son, wanted to see and believe the best in him despite everything. I adored Ruby Pearl Banks, a black woman who takes Vidalia under her wing. Her own story intrigued me. I wish she'd made an appearance earlier in the novel. She's the only character I didn't want to kick some sense into. Even Doc Feldman, who did what he could to help Vidalia, should have done more, I felt.

What make this novel stand out is that it is narrated by Vidalia and JB's unborn baby, one which Vidalia miscarries. The spirit of the unborn child, Cieli Mae, hangs on, staying with her mother, observing and helping her through the roughest of times. I did not quite buy into Cieli Mae's role in the novel, as much as I wanted to. At times she seemed like a splinter of her mother because of Vidalia's stress and hopelessness. I might have bought that more easily.

My Sweet Vidalia is a very sad novel. Even with Vidalia's flicker of hope and Cieli Mae's efforts to keep that going, I found this to be a depressing read. At the risk of spoiling the novel, it doesn't stay that way. There is hope. There is redemption of sorts. And I was quite satisfied with the ending. I might have fist pumped the air at one point.

In the end, I have mixed feelings about My Sweet Vidalia. While pulled into the novel immediately, I found it slow going after awhile with not much character growth or story development. It does pick up, fortunately. Even despite my inability to completely buy into Cieli Mae as the narrator, I liked Deborah Mantella's writing. The story was rather predictable, but compelling just the same. This book may not have been the best fit for me, but it has garnered much praise from other readers, including several along the tour route. I hope you will check out their reviews before accepting my word for this book. I would be interested to try something else by the author.

I hope you will check out what others had to say about My Sweet Vidalia on the TLC Book Tours route!