Bookish Thoughts: The Girl in the Red Coat by Kate Hamer

I dream about Carmel often. ~ Opening of The Girl in the Red Coat 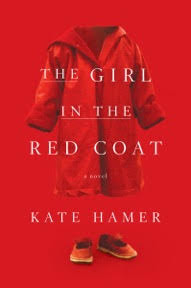 Kate Hamer's stand-out debut thriller is the hugely moving story of an abduction that will keep you guessing until the very last page. Carmel has always been different. Carmel's mother, Beth, newly single, worries about her daughter's strangeness, especially as she is trying to rebuild a life for the two of them on her own. When she takes eight year-old Carmel to a local children's festival, her worst fear is realised: Carmel disappears. Unable to accept the possibility that her daughter might be gone for good, Beth embarks on a mission to find her. Meanwhile, Carmel begins an extraordinary and terrifying journey of her own, with a man who believes she is a saviour.

It was almost eerie how similar The Girl in the Red Coat was to Gilly Mcmillan's What She Knew in the beginning. At least in terms of the books being about single women, each of whom were left by their significant others for younger women. And each who had 8 year olds who disappeared one day after wandering off. Both novels capture the fear and grief a mother goes through when her child is missing. I probably noticed the commonalities more since I read them so close together. Still, the two books are very different in many more respects. Which, of course, is a good thing.

While in Mcmillan's book, the reader does not know what happened to the protagonist's son, the reader knows pretty quickly who is behind the disappearance of Carmel, the young girl in The Girl in the Red Coat. The novel is told from the alternating perspectives of a frantic mother and her confused and frightened daughter. Hamer's book got under my skin. It was a difficult book for me to read, especially in the early days and weeks of Carmel's kidnapping. Beth's anguish and grief are palpable. She is constantly second guessing herself, blaming herself for what's happened. As time passes, she finds comfort from surprising and not so surprising places. All the old grievances she might have had pale in comparison to what she is going through now. She slowly begins to rebuild her life, but always missing her daughter.

Even more compelling is Carmel's own part in the novel, about the initial kidnapping and what follows. She is so innocent and trusting. She is often lost in her own thoughts and is easily distracted. It was impossible not to feel afraid for her, especially as a mother of a young girl myself. The man who kidnaps Carmel  is quite devote, his faith driving his actions. He believes she has a special gift and that it is his responsibility to develop and share it with the world. The two lead a nomadic life, joining with his girlfriend and her daughters. Carmel forms a friendship with the other girls, and comes to think of them all as a family and yet still somehow apart from them.

I enjoyed the novel quite a bit, having a hard time putting it down. At times there an uncanny quality that appears in reference or around Carmel that can be interpreted in a couple different ways. I love it when an author is able to do something like that well, and I think Kate Hamer does for the most part. There were only a couple instances in which it felt a little off.

On one hand, you have a story about a mother grieving the loss of her daughter, looking for her in every corner, and learning to survive without her. On the other, you have the story of a girl stolen from the mother she loves and forced into a completely unfamiliar life where she is both revered and neglected. The mother/daughter bond is strong between them even with the distance and the unknown. While not a heart-stopping thriller as one might initially expect, it is a very compelling read. It is also quite heartbreaking at times.

To learn more about Kate Hamer and her work, you can find her on Goodreads, Twitter, and Facebook.

I hope you will check out what others had to say about The Girl in the Red Coat on the TLC Book Tours route!