The long Thanksgiving weekend always spoils me and makes getting up for work Monday morning hard. Somehow I managed though. We had a brief lock down in my office. I guess someone had been seen with a weapon outside our building that morning. As far as I know, it was a false alarm. Thank goodness.

My family had a very nice Thanksgiving. A couple months ago, my husband had made reservations for us to eat at Ariel's Grotto, a restaurant in Disney's California Adventure Park. It turned into a lovely day. The food was delicious, and we were entertained throughout the meal by Disney Princesses, which made my daughter happy. I think her most favorite part of the day though was spending time playing with the ice and snow. She got to meet Santa Claus, at which time she made it known she wants a stuffed toy hippo for Christmas. 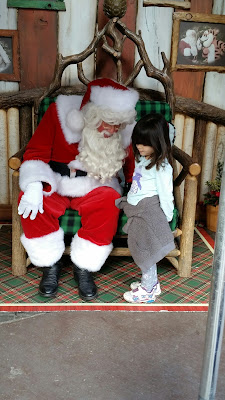 We slept in very late on Friday after a very long day at the Disney parks, and then spent the weekend decorating the house for Christmas. We still have the outside to do, but that can wait until the weekend. Mouse will not stop talking about Christmas. I am partially to blame for the constant stream of Christmas carols she is singing.

I did not get any reading done over the long weekend. I had hoped to make some progress in my current book, but I just did not get the chance. I have since eagerly jumped back into and am enjoying Alex Palmer's The Santa Claus Man: The Rise and Fall of a Jazz Age Con Man and the Invention of Christmas in New York. After all reading a couple Christmas romances, I thought it was time for a good dose of reality.

At 9:30 p.m. on the cool evening of September 9, 1913, John Duval Gluck, Jr., dressed in his best suit and bowler, his mustache carefully groomed, basked in the excitement of a stadium full of his fellow New Yorkers. A light breeze carried the scent of saltwater and stale food over the hundreds of onlookers packed into their seats. They whooped at what they saw before them: in the flesh, ambling around the arena, was something they had only heard about in stories and seen in picture books.

Teasers from The Santa Claus Man at 7%:

Without a qualified person to answer them, the fact that the Santa letters would simply be thrown out seemed a callous, unnecessary cruelty to him. He could picture what joy it would be to play New York's Santa Claus, to introduce poor kids to the sort of holiday cheer he had known growing up.

"I have just a few reasons to believe that the Mr. John Duval Gluck referred to in [the] paper as Founder of this Santa Claus Association, may be a German spy," began the anonymous letter sent to the U.S. Secret Service.

This week's  Top Ten Tuesday theme is Top Ten 2016 Debut Novels I Am Looking Forward To. I decided to interpret this week's question as authors debuting their first novels. Trying to stick to debuts was a bit of a challenge because there are so many books by authors who have several books out already coming out this next year I want to read--and that's only the few I have heard of. Here are ten debut books by new authors I am VERY eager to read:

The Night Parade by Kathryn Tanquary (January, 2016) ~ This one comes recommended by my friend Caspette of Narrative Causality. I love the cover and the focus on Japanese mythology.

The Longest Night by Andria Williams (January, 2016) ~ I'm intrigued by the time period and setting of this one most of all:


Based on a true story of the only fatal nuclear accident to occur in America, The Longest Night is a deeply moving novel that explores the intricate makeup of a marriage, the shifting nature of trust, and the ways we try to protect the ones we love.

Blackhearts by Nicole Castroman (February, 2016) ~ The tale of a young man longing for the sea and a young maid wishing to return home. This is a retelling of Blackbeard's younger years, and what led him to become one of the most infamous pirates in history.

The Girl in the Red Coat by Kate Hamer (February, 2016) ~ Already published in the U.K., this one is coming to the U.S. in February. As much as books like this are likely to give me nightmares, I cannot resist them on occasion. And this one has grabbed my attention. It is about a mother whose daughter wanders off and goes missing--told from the perspective of both the mother and child in alternating chapters.

The Widow by Fiona Barton (February, 2016) ~ This one sounds very intriguing! Married to a man accused of committing a terrible crime, she has worked hard at being the perfect wife. When he dies, everyone turns to her for answers. But Jean has gotten good at being just who she needs to be, and the story she decides to tell may or may not be the truth.

Try Not to Breathe by Holly Seddon (February, 2016 ~ Alex is a young journalist who decides to try and solve a 15 year old crime involving a girl-now-woman still in a coma, while dealing with her own issues. On the surface, I admit this one sounded a bit like some of the other books out there recently in terms of Alex's particular demons, but something about this book calls to me. Maybe it is the solving of a cold case. Or maybe it's to see just how Amy and Alex's stories play out. Plus, I can't resist an unreliable narrator.

Tears in the Grass by Lynda A. Archer (March, 2016) ~ At the heart of this novel is a 90 year old woman who goes on a journey to find her long lost daughter, the daughter taken from her after she was raped as a child while at a residential school.


Confronting a history of trauma, racism, love, and cultural survival, [Tears in the Grass] is the story of an unflagging woman searching for the courage to open her heart to a world that tried to tear it

Just Fall by Nina Sadowsky (March, 2016) ~ I was sold when I read: "Balanced on the razor edge of moral ambiguity, this sexy and seductive debut novel asks: How can you find out that the person you love is a killer…and continue to love him anyway?" She had no idea her new husband had been keeping a dark secret from her--but she soon finds out. This one promises to be quite the suspenseful ride, and I am looking forward to taking it.

The Decent Proposal by Kemper Donovan (April, 2016) ~ Another one that piques my curiosity and has me wanting to know more:


A debut novel in which two people are brought together by a very decent proposal cooked up by a very secretive benefactor in which the strangers go on one year of dates, one date a week, for half a million dollars each if they can stand each other for the whole time.

Sleeping Giants by Sylvain Neuvel (April, 2016) ~ I generally try to ignore book comparisons because they often are far off, but when I read this one was a cross between World War Z and The Martian, I just know I have to take a closer look.


17 years ago: A girl in South Dakota falls through the earth, then wakes up dozens of feet below ground on the palm of what seems to be a giant metal hand. Today: She is a top-level physicist leading a team of people to understand exactly what that hand is, where it came from, and what it portends for humanity. A swift and spellbinding tale told almost exclusively through transcriptions of interviews conducted by a mysterious and unnamed character, this is a unique debut that describes a hunt for truth, power, and giant body parts.

Are any of these are your To Read List? What 2016 debuts are you looking forward to?