I went missing fifteen years ago. ~ Opening of Hidden 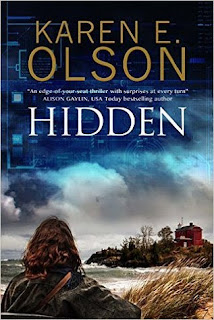 Nicole Jones has spent the last fifteen years establishing a life for herself on Block Island in the Long Island Sound. She has a small group of close friends and a job she likes. She has never quite been able to shake that outsider status, but the locals have come to think of her as one of their own, even despite her keeping mostly to herself. Nicole avoids getting too close to anyone--at least in terms of sharing information about her own past. She has secrets she would rather leave buried, including that she was once a hacker. That's why she changed her name. And why she doesn't have a driver's license or bank account. When someone from her past re-enters her life, Nicole's carefully crafted lies and world begin to unravel. Not only is her own life at risk, but so are the lives of her friends. The home she once felt so secure in, is no longer a safe haven.

To be honest, I would have picked up this book to read based on the author alone, having read and enjoyed her previous books. Karen E. Olson is one of my favorite crime fiction authors. Even without that though, I was drawn to this book based on the description. It isn't often you come across a female hacker as a protagonist, and I do love a mystery involving secrets.

I really liked everything about this novel, from the island setting to the small close-knit community and the people who live there. I ended up reading the book in a day; not because it was one of those fast-paced-every-second-is-a-thrill type novels, but because I just couldn't stay away. The writing drew me in immediately, and I could not help but connect with the characters. The reader gets a good feel for the life Nicole had been leading all those years in hiding and just what is at stake when all of that is threatened. The intensity increases as the story unfolds, each new twist raising the stakes.

The more I learned about Nicole, the more my heart went out for her. She hadn't always made the best choices in her younger years, and she openly admits that. While she likes the new life she's established, she had to sacrifice a big part of who she is. There is one scene in the novel in which Nicole uses a computer again after fifteen years, and Olson captured so well the excitement and trepidation someone in Nicole's shoes might feel. I like to see that kind of depth go into a character. It paints a more realistic picture.

I admit to being a little concerned about the fifteen year gap in Nicole's computer knowledge--a lot has changed technology-wise in that amount of time. I liked the way the author handled that though. She didn't gloss over it, nor did her character, who had the same concerns.

The author did not skimp on the backstories and development of the minor characters. I came to really care about them as well. Especially Nicole's closest friend, Steve. He would do anything for Nicole.

I gobbled up the tattoo artist Brett Kavanaugh series and just loved Karen E. Olson's investigative reporter series featuring Annie Seymour. Both series are quite different from one another, but carry the author's trademark humor. Hidden is a more serious novel, more reflective really.  Hidden is both complex in story and character. It is also highly entertaining, as all Olson's novels have been. I am excited that there are two more books slated to come out in this series. I have no idea what will happen in the next book, Shadowed, but I can only hope it will be as good as Hidden.

To learn more about Karen E. Olson and her books, please visit the author's website. You can also find the author on Goodreads, Facebook, and Twitter.