Bookish Thoughts: A Dictionary of Mutual Understanding by Jackie Copleton

Even the kindness of the half-light could not hide his disfigurement. ~ Opening of A Dictionary of Mutual Understanding 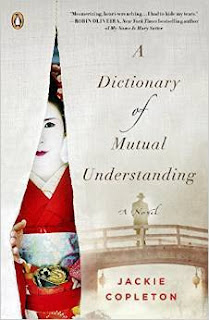 Amaterasu Takahashi has gone through the motions of living for much of the past forty years. She drinks too much, perhaps, but she has settled into a quiet existence. With that knock on the door and the man before her claiming to be the grandson killed in the atomic bombing, or pikadon, of Nagasaki, Ama refuses to believe it possible. After she shuts the door, she opens the letters he brought her and begins to read, forcing herself to relive the past she has worked so hard to forget. Soon she is digging the journals of her deceased daughter out of the closet and begins to read those as well. The past comes flooding back--not only of the events surrounding the attack on Nagasaki, but also of Ama's own childhood.

Told in a non-linear fashion, A Dictionary of Mutual Understanding is Ama's reflection on the past via letters, her daughter's journal, and her own memories. The reader learns of Ama's secrets and biggest regrets, about the role they played in her later actions, about her daughter's affair, and the fallout of that.

The relationship between Ama and her daughter, Yuko, was a complicated one, especially after Yuko began sneaking out. Yuko was bored with her life and falling in love was the best thing that had happened to her. Her parents were furious, not just because of her sneaking around, but with whom she had chosen to sneak around with. Their very family reputation was at stake--but it was really more than that. Much more than Yuko would ever know. Ama's own story is very different from her daughter's in many respects, but it is one she never talked about--of poverty and hostess bars--and it colored her reactions and behavior toward her daughter during those final years of her daughter's life. Ama had only wanted to protect her daughter, to save her, but she wonders now if she had made a mistake.

What stands out in the novel is the devastating impact of the atomic bomb dropped by the United States on Nagasaki. It was the second of its kind to hit the country of Japan, and it's impact was horrific and long lasting. Ama had been scheduled to meet her daughter at a church in the city, but had been running late. Her daughter's body was never found, but her death a foregone conclusion. Ama and her husband were sure their grandson, Hideo, had been killed too. Ama had dropped him off at school that same morning. They had searched for both Hideo and Yuko for weeks after, finding no evidence of their survival.

Each chapter begins with an English word, followed by the Japanese translation and a definition in relation to the Japanese culture. It is a nice touch, adding more nuance to the story being told.

I liked this novel on many levels. It is a sad story to say the least, one of loss and grief, of regrets and secrets kept. It is also the story of forgiving oneself and finding peace with the past. Jackie Copleton's beautiful writing drew me in, and made me feel like I was part of the story, seeing everything as it unfolded and came together.

I had never heard such a noise before. It felt as if the world's heart had exploded. Some would later describe it as a bang, but this was more than a door slamming on its hinges, or an oil truck thudding into a car. There can be no word for what we heard that day. There must never be. To give this sound a name might mean it could happen again. What word can capture the roar of every thunderstorm you might have heard, every avalanche and volcano and tsunami that you might have seen tear across the land, every city consumed by flames and waves and winds? Never find the language for such agony of noise and the silence that followed. ~ Excerpt from A Dictionary of Mutual Understanding, page 23