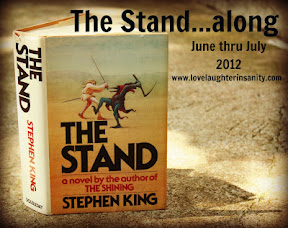 Way back at the beginning of the year I got excited about the The Stephen King Project, and committed to reading at least one book by the famous author.  I am not a Stephen King virgin, although I am still what one would probably call a novice, only having read two of his books (Misery and Cell).  One I loved and the other, well, I was at least entertained even if perhaps not in the way the author intended.  There are certain King books I will likely never read (Pet Sematary and Cujo being among the top two) and others which are on my must read list (The Stand, The Shining, Carrie, the Dark Tower series, Dolores Claiborne and Dead Zone).

When I discovered Trish from Love, Laughter, and a Touch of Insanity, was hosting a Stand-Along from June 1st to July 27th, I went back and forth: to join or not to join.  Every second of reading time I get these days is precious and I seem to have committed myself to probably more than I should have as it is.  But.  Try as I might, I am unable to stay away.  Besides, I did commit to reading at least one Stephen King novel.  Might as well be The Stand.  And if I don't finish the novel by the Stand-Along's deadline, that's okay.  Trish isn't likely to draw blood or beat me with a stick (at least I hope not).

1. What makes you want to read The Stand?

Ever since I heard the story about The Shining, the one in which it's so scary it's worthy of hiding away in the freezer, I have wanted to read it.  Even though it's really not my usual type of book to read.  I am not opposed to horror novels by any stretch.  I've read my share of them, especially early on.  I tend to prefer a certain kind over another though (which is why I laughed my way through Cell and sat on the edge of my seat and felt the intensity of Misery).  My suspension of disbelief isn't so wide as to encompass everything, after all.  Still.  I want to try The Shining even though I have a feeling it will test the boundaries of my imagination--and maybe tickle my funny bone (although, I really hope not).  Honestly, I'm not sure where my preconceived notions about The Shining come from.  It has many elements I love and look forward to in a book.  Maybe it is because it's Stephen King.

There's also the fact that Jack Nicholson stars in the 1980's movie version.  And I really want to see the movie.  I can't do that, however, without reading the book first.  I made that rule a long time ago.

2. Describe your preconceived notions of The Stand.

I am not even sure what The Stand is about.  A super virus, I think.  I worry that I won't find it very original, but I expect it will be suspenseful and intense as that's Stephen King's trademark.  The suspense and intensity being his trademark, I mean.  Not the originality part.  Most likely it is very orginal and others have followed in King's footsteps; only, it won't seem that way to me since I'm reading the book so late in the game.  For the record, I haven't seen the movie either.

3. What was the last scary(ish) book you read or movie you saw?

I currently am reading a book called Hide Me Among the Graves by Tim Powers.  It features ghostly vampires, which are actually quite intimidating.  The vampires aren't anything like what you find in most vampire literature today--it truly is more of a horror novel.  The jury is still out on what I think so far, being as I'm only about half way through.

As for movies, I barely remember the last movie I saw.  One for the Money, actually, but that doesn't count as a scary movie.  Well, maybe to some.  I mean, the casting did scare some people away.  I rewatched the movie Hotel Rwanda, which was all too scary--even more so since it was based on real events.  I don't think that's the type of scary meant though.

4. Which version of the book will you be reading?

I can't resist reading the uncut version. I have a paperback copy that has really small print.  I think the page count comes out to 1120 or something close to it.

5. What are your previous experiences with Stephen King?

As I've mentioned before, my experiences with Stephen King have been hit and miss so far.  I really enjoyed Misery.  Cell, on the other hand, I found it to be predictable and on the ridiculous side.  I had fun reading it, but when all was said and done, I was disappointed.

6. Anything else you'd like to add (bonus points for being extra random).

I got a subscription to Entertainment Weekly solely because of Stephen King's column.  I was so disappointed when he was no longer a regular on their staff.  I barely read the magazine now.  Of course, that could have something to do with my attention being elsewhere, but I like to blame it on the lack of Stephen King factor anyway.  Thank goodness he still writes something for them every now and then.

Are you participating in the Stand-Along?  What Stephen King books, if any, have you read?