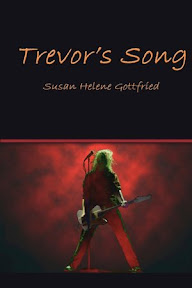 Susan Helene Gottfried first came to my attention through blogger Florinda of The 3 R's Blog. Susan writes the blog West of Mars and began recording her characters various adventures on her website several years ago, giving readers a taste of what to look forward to in her novel. I never really followed her blog and so was unfamiliar with the Shapeshifter rock band. It took me awhile, but I finally purchased a copy of Shapeshifter: Demo Tapes, Year 1 (2008, 134 pgs) and Trevor's Song (303 pgs) to see what all the fuss was about.

I really wasn't sure what to expect going into Trevor's Song. I hadn't read a synopsis of the book going in. All I knew was that it was about a rock band, and probably one you wouldn't find me listening to if Shapeshifter was a real band. Heavy metal is more my husband's type of music. When have I let a little something like that stop me from reading a book, however? I was curious and so I dived right in. One thing I especially liked about Shapeshifter: Demo Tapes, Year 1 and Trevor's Song was how real and normal the characters were. And by normal I mean like you and me. They could have been teachers at a school, for instance. Only they weren't. They are part of a pretty popular rock band. Only, fame hasn't gone to their heads. 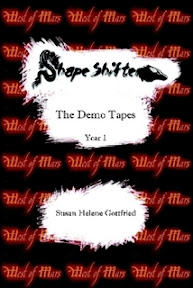 Mitchell seems like someone I wouldn't mind hanging out with--he and Kerri. Sure he has a bit of a temper, but he's got it pretty well under control. The rest of the band seems pretty cool too. Even Trevor who leans toward the drama queen. He tries a bit too hard to perfect the rocker image. Trevor and I didn't mesh right away, I admit. He grew on me after awhile--although I never stopped seeing as that lost puppy dog that needs caring for. Let's just say he has a lot of issues--both past and present.

There is a degree of humor mixed in with the serious in Gottfried's writing. She tackles some pretty difficult topics from child abuse to breast cancer. I really came to care about her characters and enjoyed spending time with them.

If I could do it over again, I think I would have read Trevor's Song before diving into Shapeshifter: Demo Tapes, Year 1. Some readers will appreciate trying the sampler first, getting to know the band that way. It certainly was a smart way to get her blog readers invested in her characters before the novel came out. I, on the other hand, would have preferred the novel first.

I look forward to moving on to Shapeshifter: Demo Tapes, Year 2 soon.