Bookish Thoughts: Catherine the Great: A Portrait of a Woman by Robert K. Massie 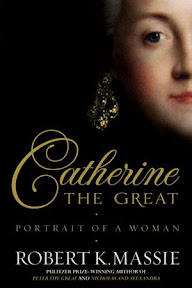 Catherine the Great: A Portrait of a Woman by Robert K. Massie Random House, 2011
Nonfiction; 656 pgs

I confess I am not particularly enamored by royalty, whether past or present. And so when it comes to reading about the royalty (fiction or nonfiction), I tend to steer clear unless a book comes highly recommended. Add to it the fact I am not a big biography fan. I have read really good ones and some that are not so good--okay, a couple that were downright awful. Catherine the Great: A Portrait of a Woman by Robert K. Massie falls into the really good category. Catherine the Great: A Portrait of a Woman was my book club's March reading selection. I probably would not have read it without their urging.

Having spent nearly a decade researching Catherine and her life, Massie's book is well documented. He captures Catherine's voice in the pages, something I've found can be difficult to do when it comes to biographies.

Catherine began as Sophia Augusta Fredericka, the daughter of a devout Lutheran general and governor and an ambitious and vain mother. She was precocious and intelligent. She loved to read, not to mention learn. Sophia was a girl after my own heart. I saw in the young woman a kindred spirit. She was someone I wish I could have known. Her family was not wealthy and her station relatively low, despite Sophia's princess status. As a result, her mother wanted Sophia to marry well and planned and schemed accordingly.

Sophia's marriage to Peter of Holstein-Gottorp was not only a match sought by Sophia's mother, but also by both Frederick II of Prussia and Empress Elizabeth of Russia for political reasons. It also served Sophia's purposes. It was a way out of her mother's household. Sophia, renamed Catherine by Elizabeth upon her conversion to Eastern Orthodoxy and marriage to Peter III, was to become one of the most well known and thought of leaders in Russian history.

Catherine was extremely bright and knew how to get what she wanted. She was ambitious, but her ambition for power was marked by her desire to better Russia--not just her own station. She was a relatively benevolent leader, interested in the arts and culture. She desired to better Russian society, including ending serfdom, something she was unable to do due to politics and various circumstances. She was a strong believer in the Enlightenment and tried to apply many of its teachings in her leadership of Russia, sometimes with success and often without. Catherine was a hands on leader, taking part in local government as well as issues abroad. She helped make Russia a country to contend with. She truly was ahead of her time.

I was fascinated by Empress Elizabeth. I can see why Catherine was enamored by her initially. She could be very maternal on one hand and very cruel on the other. It broke my heart when she took Catherine's children from her and would not allow her to hold or see them right after they were born. And then to send away anyone either Peter or Catherine became close to . . . I also was appalled by her treatment of Ivan, the boy who could threaten her hold on the thrown. He had been an innocent child when locked away and was never allowed to have even a smidgeon of a normal life.

Over her lifetime, Catherine took on many lovers and, where she was skilled in her role as empress, she was less successful in her personal relationships. Even as a leader, Catherine did not use the best judgement, sometimes giving in to vanity or fear. You would have thought she'd learn from the way she had been treated to not make the same mistakes, and yet she did. But then, Catherine was only human and we are all guilty of that.

The biography covers a lot of ground and explores nearly every facet of Catherine's life, including offering in depth descriptions of the influential people in her life. I was never bored, although I did favor the first half of the book over the second. The war and political maneuvering in the second half took more careful reading to get through.

Russian history is not my strong suit and so I knew very little about Catherine going into the book. Massie clearly thinks highly of Catherine and it shows in the presentation of his book. Just the same, I believe he was fair in his assessment, sharing both the good and the bad. I walked away from the book wanting to know more--and I look forward to reading more about Catherine in the future.

Source: I purchased my own e-copy of this book.