Bookish Thoughts: Before the Poison by Peter Robinson 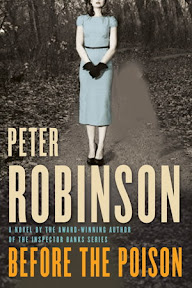 
Author Peter Robinson steps away from his Inspector Banks series briefly to bring readers Before the Poison, a stand alone novel.

As I read through the first few chapters of Before the Poison, I was coming to the conclusion that the novel would be good but nothing that would stand out. I hate to form judgements so early on, but we all do it to some degree, don't we? I liked Chris Lowndes, the narrator and main character, well enough. He has an interesting background as a music composer who scores films. He lost his wife to cancer nearly a year before and decided to move home to Yorkshire after almost thirty years in the U.S. He bought the Kilnsgate House sight unseen, only going off of photos on the internet. Like many old houses, the house has a history. And part of this particular house's history was the death of its master, a prominent doctor. The doctor's wife, Grace Fox, formerly a nurse, had been having an affair with a much younger man at the time. The affair became the cornerstone for the prosecution's case against Grace. The conviction came quickly and she was hung as a result. Chris is convinced she is innocent and sets out to prove it; only the more he learns, the more he questions his initial impression--the only thing he knows for sure is that there is more to the story than the public believed.

Much time is initially spent getting to know Chris as he settles into his new life in Yorkshire. He is prone to moments of depression, which is understandable given the recent loss of his wife. He drinks too much. He is thoughtful and introspective. He seems like an all around nice guy--and he is. He is just learning to live life again and his crusade to uncover the truth about Grace helps him find his way. His friends think he's obsessed--and maybe he is. Well, if he is, so was I, as the novel went on. I confess there were a couple of times I wanted to speed through Chris' ruminations and get back to the meat of the story--or at least when I consider the meat of the story--that is, Grace Fox.

For the first several chapters, each chapter opens with notes from the trial which eventually makes way for journal entries by Grace herself from her time as a nurse during World War II. For me, that's where the book went from good to great. I became just as enamored with Grace as Chris was. She was such an interesting character with such a rich past . . . Unfortunately (for you), this is one of those books that is layered like an onion; with each layer of skin removed, a little more is revealed. It makes writing a review with any substance a bit difficult. I will say that there is much more to this book than at first appears.

I confess I didn't quite buy into the present day love story, a minor subplot, but I liked the way the author tied Chris's own story into Grace's in the end, and I came to appreciate more the time the author took in building up Chris's personal story. It almost makes me want to go back and read the book again. Someday perhaps I will.

Even though Before the Poison is pure fiction, I couldn't help but do a little Google searching when certain names or incidents popped up. I had no reason to think they were real or made up and it certainly wouldn't have hindered the story either way. Still, I was curious and was impressed with how much research Peter Robinson put into his book. I learned about the last woman executed in England as well as more about The Queen Alexandra's Royal Army Nursing Corps, including their role in World War II, and I learned more about Porton Down. I love it when a book sparks off the researcher in me, and Before the Poison certainly did that.

Overall, I walked away from Before the Poison satisfied, if not a little melancholy. I really must read more by Peter Robinson. He impresses me every time.


You can learn more about Peter Robinson and his books on the author's website.