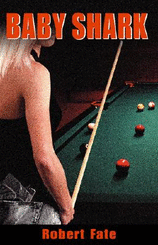 First Paragraph: The rumble of the machines stopped everything cold. No one spoke, but everyone knew what was next.


My recent crime spree has taken me from Laos to Sweden and landed me in Texas, the setting for Robert Fate’s novel Baby Shark. Kristin Van Dijk is only seventeen when her father is murdered before her very eyes. She is left for dead after being sexually assaulted and beaten.

Although he lost his own son to the murderous biker gang, Henry Chin, owner of the pool hall where the crime went down, comes to Kristin’s rescue, pulling her out of the burning building and saving her life. Together, Kristin and Henry are determined to go after the men responsible for the deaths of their loved ones and for hurting Kristin. The police do not seem to care and someone has to pay the price of justice.

Baby Shark is set in Texas during the early 1950’s, a time before DNA testing, cell phones and computers. Women and minorities had their place in society and rarely stepped outside of that. Kristin broke the mold when she picked up the pool cue, following in her father’s footsteps, and trained to be a killer. She had been victimized once and instead of turning inward, she decided to face her fear and act out against it.

Kristin is both intelligent and quick on her feet. She has a hard outer shell, having built up her defenses to protect herself as best as she can. She can kill without remorse. And yet, she still holds onto her humanity. One of my favorite moments in the book is when she asks about the welfare of the dogs, knowing the owner will not be able to see to them anymore.

Robert Fate brings together an unlikely cast of characters. There is Henry Chin, the cabinet maker, who takes Kristin in and helps guide her down her new life path; Sarge, a World War II veteran, who teaches both Kristin and Henry how to fight; Albert, the one legged Korean War veteran who has a weakness for booze and whose knowledge in guns comes in handy; Harlan, a con man and pool hustler who mentors Kristin in the game of pool, shaping her into Baby Shark, a force to be reckoned with at the pool table; and Otis Millett, the former police officer now private investigator, who Henry hires to find the men behind the attack at the pool hall on that fateful night. Each of these men plays an important part in Kristin’s life as she transitions over from child to woman.

The novel is even more salient, coming from Kristin’s point of view. Robert Fate’s writing style is straight forward, and the story he has created is captivating. There was a split second near the beginning of the novel when I wondered if Baby Shark was for me, but that thought died a quick death the more I read. Baby Shark is one of those stories that grips hold of the reader and plays on the emotions. It is easy to understand why Kristin and Henry seek a justice of their own variety—and I cheered for them all along the way.

As an aside, I commented to my husband a couple of times as I was reading the novel how I could see this book being made into a movie, and so I was quite pleased when author Robert Fate mentioned at the book signing this past Saturday that it will in fact become a movie. I look forward to seeing it!


Check out Robert Fate's website to learn more about the author and his books.


“I read everything. My dad started that habit. I cherish books and reading because of him. There were times when I was with him that we would drive to somewhere pretty in the morning and just read our books until it was dark. And we would consider that a day well spent.” [pg 129]
Posted by Literary Feline at 12/16/2008 05:00:00 AM