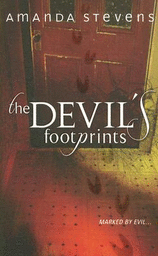 We’re the same Sarah. Not outwardly, of course. But inside, our souls are mirror images. [pg 57]

Sarah DeLaune was 13 when she first met Ashe Cain. He was mysterious and dark, coming at a time in Sarah's life when she felt most alone and out of place. He disappeared just about the time Sarah's older sister was brutally murdered. Rachel DeLaune was killed at the site of a town legend, in an Arkansas farmhouse where it was believed the devil had visited 70 years before, leaving behind his cloven footprints. Sarah does not recall that fateful night, the memories buried deep in her subconscious.

Fourteen years later, Sarah is making a name for herself as a tattoo artist working and living in New Orleans. She is haunted by her past, struggling to survive as best she can despite the night terrors and insomnia that plague her. When she gets a call out of the blue from her former boyfriend, Detective Sean Kelton, she does not know what to think. Their relationship did not end on good terms and he was the last person she wanted or expected to see or hear from again.

A body had been discovered bearing an unusual tattoo. Sean wants Sarah to take a look at it and offer any insight as to the creator or the crime. Sarah's past collides with the present when cloven footprints are found at the scene of the crime. She is forced to remember events she most wants to forget--lives could depend on it.

Sarah is scarred by her past and is guarded as a result. She does not easily let people in. Sean was the one person she let get the closest to her, and even he betrayed her in the end. Sean himself is not without his ghosts, his own past a dark spot in his life. All of the characters in Amanda Stevens' novel, in fact, have their own secrets, and are mired by their pasts in some way. They are complex and flawed. The dichotomy between dark and light is played out in many ways throughout the novel, not just on the back of one of the murder victims in the shape of a tattoo.

Amanda Stevens' The Devil's Footprints is an exciting and fast moving novel that takes readers from a quiet small town in Arkansas to post-Katrina New Orleans in Louisiana and back again. The plot is intricate in execution, and readers get a feel for just how tormented Sarah must feel as events unfold. Author Amanda Stevens is definitely an author to watch for. Originally published on Curled Up With A Good Book at www.curledup.com. © Wendy Runyon, 2008.