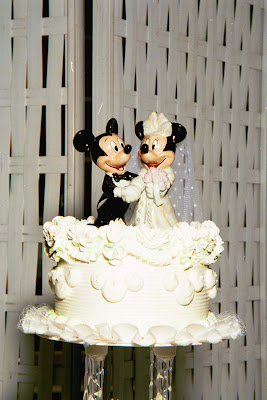 Thank you for all the anniversary wishes! It is hard to believe Anjin and I have been married for ten years. It seems like just yesterday that I was preparing to take my wedding vows. I was lucky enough to marry my best friend, and I still am madly in love with him all these years later.

Thank you, too, for all who participated in my anniversary drawings! I was not sure what kind of response I would get when I asked participants to list their favorite literary couples. While some of the couple listed are ones I am familiar with, others were completely new to me, and, as a result, my wish list has grown just from this challenge.

I went ahead and compiled a list of all the couples mentioned, along with the number of people who nominated them. Anne and Gilbert and Elizabeth and Mr. Darcy tied for first place with 9 votes each. I especially liked that a few people listed author couples--those, too, count as literary couples, perhaps even in the truer sense.
(photograph of the top layer of Literary Feline and Anjin's wedding cake)

Beatrice and Benedick
- Much Ado About Nothing by William Shakespeare

Aragorn and Arwen
- Lord of the Rings by J.R.R. Tolkien

Eve Dallas and Roarke
- In Death series by J.D. Robb

Lan & Nyneave
- The Wheel of Time series by Robert Jordan

Perrin & Faile
- The Wheel of Time series by Robert Jordan

Mrs. Frisby and Justin
- The Secret of NIMH by Robert C. O'Brien

Katharine Clifton and Almasy
- The English Patient by Michael Ondaatje

Ash and Anjuli
- The Far Pavilions by M.M. Kaye

Katherine and John of Gaunt
- Katherine by Anya Seton

Honour (Beauty) Huston and the Beast
- Beauty by Robin McKinley

Jane Calhoun and Wilson Lewis
- The Wedding by Nicholas Sparks

Enough of the mushy stuff! Let's get to the winners of the drawings! Again, thank you to all who took the time to participate. I wish I had prizes to give out to each of you.
The ARE Winners:

The Accidental Mother by Rowan Coleman is going to Monica of Monniblog!

Dedication by Emma McLaughlin and Nicola Kraus is going to Bunny B.!

Waiting to Surface by Emily Listfield is going to Carrie K. of Mommy Brain!

Sex Wars by Marge Piercy is going to Lisa of Books. Lists. Life!

The Last Blue Mile by Kim Ponders is going to Tracy of Bookroomview's Weblog!

Leftovers by Laura Wiess is going to Wendy of Caribousmom!

Everyone who answered the contest question was entered into the Book of Your Choice Drawing (with the exception of a couple of people who asked not to be). I enlisted my husband's help in the random drawing--might as well make it a couple's event!
Book of Your Choice Winner:

Elizabeth from An Adventure in Reading!
Four people went so far as to take me up on my offer to post their responses on their blogs. I would like to extend an extra thank you to Elizabeth, Chris, Suey, and Kailana and send them a little something special for their effort.
Please do visit their blogs if you have not already!

An Adventure in Reading
Book-a-rama
It's All About Books
The Written World
Thank you for celebrating with me!