Death Without Company by Craig Johnson 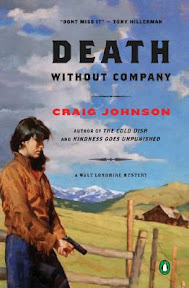 He stared at the chessboard. “The Basquos have an old proverb, ‘a life without friends means death without company.’” [excerpt from the book]


Craig Johnson's Death Without Company is the second book in his mystery series featuring Sheriff Walt Longmire of Absaroka County in Wyoming. It does not take long to be transported right into the pages of the novel. Craig Johnson's writing evokes a strong sense of place, and you might find yourself shivering and trying to keep warm in the winter cold even on the hottest summer day.

With the holidays approaching, Walt is wondering what to get his daughter for Christmas. He has an upcoming interview scheduled with a prospective new deputy, and his protégé, Deputy Victoria Moretti, is standing outside the grocery store ordering people to go to the courthouse for jury duty. All seems normal in the county as one of the largest winter storm of the season approaches.

When Walt arrives at the assisted living home to play a weekly game of chess with the former sheriff, Lucian Connally, he soon finds himself knee deep in a possible murder investigation. Despite the fact that the elderly woman's death appears to be of natural causes, Lucian insists that foul play was involved. He demands that an autopsy be completed and her room be sealed off. As the investigation unfolds, Walt uncovers dark family secrets and a possible murder from over fifty years before. He also learns more about the former sheriff, the man he calls mentor and friend. Lucian has secrets of his own that he has kept locked away; secrets that involved the once beautiful and now dead Mari Baroja.

Mari's abusive husband disappeared over 50 years ago, believed to have walked out on his family. However, there are those who tell a different tale, one in which he walked straight into his grave. She was the mother of three children, a son who died in the Vietnam War and two twin daughters who went on to practice law. Lana Baroja, Mari's granddaughter, owns and runs a bakery in Durant. Any of them could stand to inherit a fortune from the newly deceased Mari, depending on the terms of Mari’s will. The deeper Walt digs, the closer to the truth he gets. Several murder attempts on others involved with the case only raise the stakes. While the motive becomes clearer as the novel progresses, the identity of the person behind it all remains a mystery right up until the very end.

Craig Johnson knows just how to set up a story and hold the reader's attention from page one right to the very end. He has created characters who are not only real but interesting. Deputy Vic Moretti is one tough cookie, and Ruby, the dispatcher/receptionist has never been more on the ball. Lucian offers a bit of comic relief at times and yet his story is a sad one that is sure to strike at the heart.

The middle aged sheriff, Walt Longmire, is as sharp and intelligent as ever. He manages to keep a level head even when his own life is on the line. Very little gets past him when he is on the job. While no one would want to cross him when he is angry, Walt has a big heart. He is surrounded by friends and colleagues who respect and care about him, and he always seems to pick up a straggler or two along the way that adds to the menagerie of his official and unofficial investigative team.

The author captures the rural atmosphere--the simplicity of life and the complex layers of the people he writes about. Sprinkled with the author’s dry wit, a bit of action, and an engaging mystery, Death Without Company is an entertaining and suspense-filled novel.

Be sure and stop by Craig Johnson's website for more information about his books.