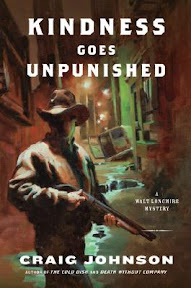 I didn’t wear my gun. They had said that it was going to be easy and, like the fool I am, I believed them. They said that if things got rough to make sure I showed the pictures, of which there were only 23; I had already shown them twice. “’Long, long ago, there lived a king and queen . . .’” [first paragraph]


Craig Johnson continues to entertain and enthrall with his latest book in the Sheriff Walt Longmire mystery series. Leaving behind the beautiful and rural comfort of home, Walt joins his best friend Henry Standing Bear in Philadelphia, where Henry will be presenting old Mennonite photographs found on the reservation to the Pennsylvania Academy of Fine Arts. This is the perfect opportunity for Walt to visit his only child, Cady, an up and coming attorney. He is less than thrilled about meeting his daughter's new boyfriend as any father might be.

Sheriff Walt Longmire faces a parent's worst nightmare when his daughter is assaulted and left near dead the night of his arrival. The circumstances of the assault and the resulting rescue raise more questions than answers. A voice mail message from Devon, Cady's boyfriend, leads Walt to believe Devon has more than his share of a bad temper. To make matters worse, Devon is not being completely truthful with the police. Walt, not used to sitting back and waiting, decides to take matters into his own hands and question Devon.

Walt did not expect his trip to turn into a full fledge murder investigation with him as one of the possible prime suspects when his daughter's boyfriend turns up dead. Walt joins in on the investigation just the same, determined to get to the bottom of Cady's assault and her boyfriend's death. With his trademark cowboy hat and charm, Walt, as always, has a way of getting the information he needs. The good guys are almost always willing to chat with the good sheriff, but the bad guys are never quite so easy. In typical Longmire fashion, Walt has the bruises, cuts and scrapes to prove it.

A rural county sheriff from Wyoming, Walt is a bit out of his element, stuck in a big urban city. Both he and his friend, Henry, are hard to miss in the city, the Cowboy and the Indian straight out of the west. Craig Johnson brings out the contrasts through both humor and the more serious moments. In one instance, Henry Standing Bear performs a healing ritual in Cady's hospital room to help guide her back home. In another a little girl asks Henry if he is an Indian, and decides to ham it up by seriously responding with a "How." Despite any cultural differences there may be between city and rural life, Walt knows how to hold his own. His manner, experience and knowledge earn him the respect he deserves, and it is not hard to see why he makes so many friends.

Walt never seems to be without his friends, both old and new. Henry is his pillar and deputy Victoria Moretti balances him out. They both are his strength when he needs it most, especially as his daughter lies comatose and his anger bubbles up inside him. Officer Michael Moretti and his and Victoria's mother, Lena, lend their own mix of strength and comfort to Walt--keeping him focused and moving in the right direction. Craig Johnson's novels are character driven. His characters are complex and relatable. Their relationships with each other play an important part in the series, both in the individual books and in the series as a whole.

The author aims to make readers laugh and cry, and he succeeds with Kindness Goes Unpunished. He takes a chance by taking his characters outside of their usual setting, and while I missed spending time in Walt's Wyoming, it was an opportunity for the author to shake things up a bit and offer a new perspective on the various characters. Craig Johnson continues to raise the bar in the mystery writing arena. Kindness Goes Unpunished is yet another not-to -miss novel in what is fast becoming one of my favorite series.