The Murder Notebook by Jonathan Santlofer 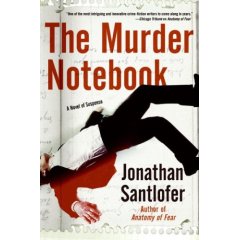 First Sentence: Dust flecked with blood, shards of debris and bone, smoke so thick he can’t breathe or see or maybe he’s gone blind; the noise, horrific a moment ago, leveling out to a dull thump, thump, thump in his eardrums until it dissolves into an absence of sound as if the world had exploded and he is the lone survivor.

I seem to be unable to read Jonathan Santlofer’s books in order. It is my own fault, of course. Fortunately, The Murder Notebook, the second book featuring police sketch artist, Nate Rodriguez, stands well on its own. Having read Colorblind by the same author several years ago, I had kept meaning to read something else by him, however, the time was never right. When this novel was offered on Library Thing’s Early Reviewer Program, how could I resist the opportunity? From the start, I could tell I was in for a wild ride.

Asked to help reconstruct the face of a murder victim that had been burned in an effort to cover up a murder, Nate Rodriguez could not be more eager to put his forensic anthropology skills to the test. However, the recent unsolved murder of a college student has the New York Police Department in a noose that is growing tighter and tighter as the media and public demand resolution. Nate, having assisted the homicide unit in solving a major case not too long ago, is pulled into the current investigation. Both he and his girlfriend, Terri Russo, the leader of the task force to catch the murderer, are reluctant about working together at first, but as events unfold, the two prove to be well matched.

With another man brutally murdered, the stakes grow even higher. The pieces of the puzzle do not seem to fit. With the threat of the FBI getting involved, Terri knows she must search out the answers and fast. The victims seem to have nothing in common and when their killers begin dying as well, the puzzle only grows more complicated.

Nate Rodriguez is settling into himself. He is struggling with guilt and the role he believes he played in his father’s death. He is on the outside, never quite fitting in with the other homicide cops. Nate is stubborn, a characteristic which plays into the fact that he does not give up easily, especially when walls are thrown up to thwart his efforts. Terri Russo has worked hard to earn her position as lead of the task force. She knows her position is precarious in a male dominated field. She takes her lumps and does the best she knows how.

Both characters are complex, and the author appears to have taken great care in making them as authentic as possible. The attention to detail and the descriptions of facial expressions give away the author’s artistic nature. In addition, the artwork throughout the book adds an extra dimension to the novel as a whole as well as to Nate’s character, some of the sketches helping the story along more than others.

Jonathan Santlofer creates an edgy and thought provoking novel. While at times it seems unbelievable, the story is not so far off reality as we may want to believe. The author combines careful research with and an entertaining fictional story. The Murder Notebook lived up to my expectations. It definitely was one wild ride.

Visit the author's website for more information about Jonathan Santlofer and his books.
Posted by Literary Feline at 4/15/2008 05:00:00 AM