A Grave In Gaza by Matt Beynon Rees 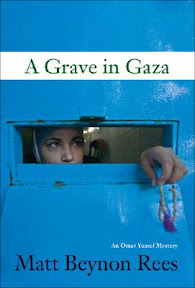 First Sentence: As Omar Yussef came along the passage, the flies left the flooded toilets to examine him.

The violence and corruption in Gaza is well known. The struggle for power and control is a never-ending battle, and some of those people in power do not care how they get what they want just as long as they end up on top. Matt Beynon Rees captures all of that in the second novel of his Omar Yussef series, A Grave in Gaza, a suspenseful and emotion-rousing mystery.

Omar Yussef Sirhan is the principal and teacher at a girl's school in Bethlehem. He is visiting Gaza along side his boss, Magnus Wallender, from the United Nations Relief and Works Agency, with the intention of inspecting the refugee school in the area. Omar Yussef discovers quickly that Gaza is nothing like his own hometown, with the area’s warring gangs and violence on the streets as well as the political games and maneuvering. Magnus and Omar Yussef are met at the checkpoint by the United Nations Security Officer, James Cree, their designated guide while conducting the inspection. However, their plans are disrupted when a teacher who divides his time between the university and the refugee school is arrested as a collaborator, accused of being a CIA spy. A visit to the teacher's house reveals that he in fact had spoken out against the selling of university diplomas to officers in the Preventative Security in order to help greedy and power hungry officers promote through the ranks quickly. Omar Yussef, a strong believer in standing up for what is right, is drawn immediately to the cause of the teacher, and he becomes determined to help him and his family in any way he can.

Omar Yussef and his counterparts seek answers at the highest levels and are met with resistance at every turn. The stakes are raised even higher when Magnus Wallender is kidnapped by one of the local gangs who is demanding the release of a brother who was arrested for the murder of an intelligence officer. Although Omar Yussef knows very well he is getting in over his head, he cannot let it go. Could the kidnapping of his friend and the arrest of the teacher be connected? It does not appear so on the surface, but Omar is determined to find the thread and pull it with all his might until everything unravels and becomes more clear.

Omar Yussef is an unlikely hero. At fifty-six years old, out of shape, and out of his element, the Palestinian history teacher has the advantage of being an ordinary fellow, which makes him easy to trust, not only by those he meets in the book but by the reader as well. He has integrity and intelligence, which makes him dangerous to those who may be corrupt. What he lacks, Sami Jaffari makes up for: contacts in high places as well as the cunning and skill to survive in such a violent landscape. Sami is a bit of mystery and quite an intriguing character.

Based on real life events, A Grave in Gaza is a frightening and thrilling mystery full of intrigue. Matt Beynon Rees pulls no punches in describing the harshness of life in Gaza, both from the corrupt politicians to the ordinary and decent Palestinians who survive as best they can. It is the author’s portrayal of the ordinary everyday people, those who are easy to overlook amidst so much of which is bad, that offered a softer side of Gaza. They were a reminder of how present and valuable innocence is, that the corrupt leaders and their wars amongst each other are not the wars of the people, who are only looking to live their lives as best they can in peace.

In the middle of a dust storm while searching for the truth to achieve justice, Omar Yussef has so much to lose and yet he continues his efforts because it is the right thing to do. The author has written a provocative and suspenseful novel that is sure to entertain and keep the reader up late into the night. Originally published on Curled Up With A Good Book at http://www.curledup.com/. © Wendy Runyon, 2008.


For more information about the author, Matt Beynon Rees, and his books, please visit the author's website.
Posted by Literary Feline at 4/08/2008 05:00:00 AM