Mew is For Murder by Clea Simon 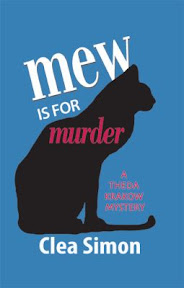 First Sentence: First there was a rustling, a scraping like metal on wood.

Reason for Reading: I first came across mention of this book when flipping through my Poisoned Pen Press catalog. I was curious about it then, but it was not until recently that I decided to pick it up when author Karen E. Olson mentioned enjoying Clea Simon’s upcoming release, Cries and Whiskers, and gave it a nod. Given a little time to try and catch up on the series before starting on the soon-to-be released third book in the series, I thought I would go ahead and start at the beginning.

Comments: I admit that I am partial to mysteries with an edge. However, I do enjoy a cozy or lighter mystery now and then. After reading a couple of particularly hard-hitting mysteries and rather dark family sagas, I was ready for something slightly different, something more relaxing and less intense. That’s where Mew is For Murder came in.

Theda Krakow is a freelance writer who is stepping back out into the world again after breaking up with her boyfriend and the death of her beloved cat, James. She had given up her steady job at the local newspaper for the more independent but less dependable job as a freelance writer. She is sure she has the perfect story when she follows a black and white kitten home one day and is greeted by an elderly woman whose only boarders are cats. Lots and lots of cats. When what seems like a simple story turns into possible murder, Theda finds herself drawn into a mystery that even she does not quite understand the full scope of--yet. She’s bound to find out though, the reporter in her unable to stop asking questions and digging for answers.

Author Clea Simon’s debut mystery novel has plenty of colorful characters from the cats to Violet, the cat loving musician/waitress, and the nosy and cranky neighbor, Patti Wright. The most colorful of all the characters, however, is Theda herself. She’s sassy and fun. She enjoys good music, taking in the club scene, and has a weak spot for cats.

Mew is For Murder was overflowing with cats, but the one that won my heart was, of course, Musetta. However, do not think this book is just about the cats. There is murder, of course, but Clea Simon also delves into mental illness and issues affecting someone with a mental illness in a very realistic way.

While light hearted and easy going, Mew is for Murder is a quick and compelling story. It is an entertaining novel that was perfect for my mood, while at the same time offering up some of the edge I prefer my mysteries to have. I am looking forward to reading the next book in the series.

Favorite Parts: I liked the added side stories that the author included in the book, the assignments that Theda took care of while the main mystery went on around her. It made the story more real, Theda more solid as a character, and some of the situations were quite funny.

It was nice to spend time with a character about my age. She’s facing some of the same issues—like being on that cusp of being too old but not quite old enough, which makes one question where she fits in exactly.

Not so Favorite Part: There were a couple of moments in the book where I thought Theda smarter than she behaved. It was perfectly in character and I can see why she acted the way she did given her state of mind and the circumstances, but it was still a tad annoying, I wanted to smack her upside the head and remind her she was smarter than that.