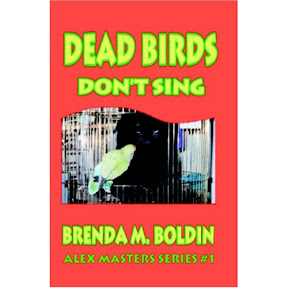 
First Sentence: Roger Beauregard leaned back against the pillows and just let her work her magic.

Reason for Reading: I was in the mood for something light and came across this title among the Curled Up With a Good Book selections available for review. It sounded like it would an entertaining mystery.

Comments: Dead Birds Don't Sing is a promising start for an entertaining new mystery series that will quickly become a must read series. Brenda M. Boldin has created a host of interesting characters, among them the steamy guitar playing Detective Cole Armstrong, the experienced and family oriented Detective Lieutenant Anthony Morello, the mean and cold-blooded Beau Rogers, the formidable Helen Shelby and the spunky and clever main character, Alex Masters.

Alex Masters is trying to lead a straight life. The former prostitute and heroin addict wants nothing more than to stay out of trouble and keep her nose clean. She has a decent job at a typing school and has a promising lead on a job as a singer in a nightclub. While dropping off a deposit for her boss at the local bank, her world comes crashing down when she falls victim to a shooting in a bank heist. All that she had worked hard to build up begins to unravel. Detective Armstrong and his partner are sure she is withholding information from them as they begin their investigation. Their suspicion of her involvement in the robbery mounts as they begin to dig into her past and connect her to at least one of the bank robbers, the vengeful Beau. Detective Armstrong is the first to voice his suspicions of Alex's possible guilt and soon the other detectives on the investigation team follow suit. He is determined to get to the bottom of the case. Alex soon realizes that she is the only one who can prove her own innocence and reclaim her reputation, and so she ventures back to her old haunting ground in search for the truth. The cards are against her from the beginning, and it is only a matter of time before the situation comes to a head.

The chemistry between Alex and Cole is intense. The two characters come head to head several times throughout the book, Alex in her stubbornness and Cole in his determination. Neither character completely trusts the other and for good reason.

Although the novel comes across as a light mystery that will no doubt bring a smile to many readers faces, there are some deeper undertones that the author subtlety blends into the story, including organized crime, corruption, drug abuse, prostitution, violence, and Alex's past and that of some of the other characters. The author balances the dark with the light in such a way as to create a novel that makes for easy reading. Alex comes across as a strong no-nonsense woman and yet there is a vulnerable side to her as well. She may be hardened because of her experience; however, she is still naive in some ways.

The story moves quickly as the events unfold, and while the mystery itself is relatively easy to figure out early on, just reading how the characters get to that final point and seeing what more trouble can possibly come their way is enough to keep the reader turning the pages at top speed. The Alex Masters series is definitely one worth following. Originally published on Curled Up With A Good Book at www.curledup.com. © Wendy Runyon, 2007

Favorite Part: In general, this was an enjoyable book to read. My favorite part was Mrs. Shelby’s reaction to Alex’s tale of how King “saved” her. Mrs. Shelby asked some pointed questions that, although they went unanswered, brought up some good points that the clever Alex is not quite ready to face.

Note about the Author: Author Brenda Boldin got her start writing as a teenager, but let it fall by the wayside once she settled into college. Later on, she began writing fan fiction for the once popular television series Diagnosis Murder and was encouraged by one the show's writers to strike out on her own with her own characters. The result is the Alex Masters' series.
Posted by Literary Feline at 4/25/2007 08:50:00 PM