The Angel of Forgetfulness by Steve Stern 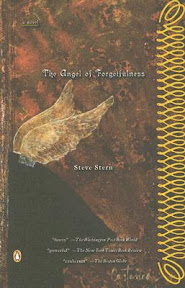 The Angel of Forgetfulness by Steve Stern
Penguin, 2005
Fiction; 404 pgs

(Fair)
(I really fluctuated on this one, between good and fair, settling on fair in the end. I do think this book deserves an audience and will definitely appeal to some. Why am I rambling here?? On to the review . . . )

First Sentence: “Gib mir ayn kush,” said my aged Aunt Keni in a Yiddish made comprehensible by the fishy pucker of her desiccated lips. “Give me a kiss.

Reason for Reading: When browsing through the list of possible books to review for Curled Up With a Good Book, I came across The Angel of Forgetfulness and the description of the book intrigued me. I was in the mood for something different, and this book sounded like the perfect choice.

Comments: The reader is first introduced to Saul, a young student in 1969 who aspires to be a poet. He convinced his family to allow him to attend college in New York City, yet another place he finds he does not quite fit in. As a result, he seeks out an unknown relative living in the city, his eccentric Aunt Keni. Their walks through the streets of the city open his eyes to sights and smells he never could have imagined, images from the past. On her deathbed, his aunt gives him a book thinking perhaps someday he will finish the story her long dead husband, Nathan Hart, had begun.

During the early 1900's, Nathan, a young Jewish immigrant happens upon a job as a proofreader for the Jewish Daily Forward after stumbling through other less enticing jobs. He leads a relatively solitary and lonely life until he meets a beautiful red head in a shop one day. He is haunted by her and desperate to see her again. It is as if he suddenly has found his muse and begins obsessively writing a story about a fallen angel. It is this story that mesmerizes and draws in the beautiful Keni, bringing her unexpectedly to Nathan’s doorstep one evening.

The third narrative is told from the perspective of Mocky, the fallen angel. Mischievous practically from birth, Mocky always wanted something other than what he was granted in life as the Angel of Forgetfulness. It was while performing his duties one day that he met Hannah, the woman who he would take his fall from Heaven for. When his wife is murdered brutally by the Cossacks and Tartars, Mocky flees earth with his son, Nachman.

Nachman follows his restless father back to earth only to find himself enamored by a beautiful actress named Sophie the Red. His own life from that point on is filled with the same obsession and torment that haunts the lives of Stern's other main characters.

What follows is the story of the four men as they make their way in the world, as they fall in love and search for something outside of and beyond themselves. The Angel of Forgetfulness touches on an age-old struggle, that of spiritual versus mortal needs.

Although the story lagged on occasion, it was overall a compelling one. The colorful cast of characters, including the look at life in New York City during the early 1900's, with the gangsters and theater life; the strong minded and independent women; the misfits of the Arkansas commune; the theater troupe in England; and the tourist guide in Prague made the novel all the more appealing.

Almost poetic in his prose, at times funny and at other times dark, author Steve Stern presents three distinct and yet connected stories that are flecked with magical realism and a touch of the philosophical. Although they share commonalities in themes and experiences, the three different narratives never quite gel completely. Despite that, The Angel of Forgetfulness does not leave the reader wanting. Originally published on Curled Up With A Good Book at www.curledup.com. © Wendy Runyon, 2007

Favorite Part: My first thought is to say I most enjoyed Saul’s story above the others, however, there were times when Nathan’s story captivated me the most, especially the more down trodden he became. What does that say about me? Haha

Some of the characters that stood out for me most: Billy Boots, Aunt Keni in her older years, during the time she spent with Saul; and Svatopluk, the Jewish “tourist guide” in Prague.

Least Favorite Part: I was not too keen on Nathan’s first chapter of the book, especially when he goes into storytelling mode. While an interesting story, this part lagged for me more than any other and I considered moving to another book if it had not picked up by the next section.

Occasionally as I read, I found myself wondering what the purpose of the book was. What was the author trying to tell me exactly? I am not sure that ever really became clear, although I enjoyed most of the ride along the way and was somewhat satisfied in how it all ended. In some respects I was reminded of One Hundred Years of Solitude, another book that left me scratching my head at times, perhaps more so than this one.

Miscellaneous: My review selections for Curled Up With a Good Book are always telling, revealing a little of the mood I was in when I was going through the list to see if any of the available titles might interest me. I received my latest requests in the mail yesterday, and while I am now kicking myself for requesting so many in the middle of the busiest part of my challenge season, I admit I am definitely hoping some of the books offer the promised laughs!
Posted by Literary Feline at 4/17/2007 06:22:00 AM