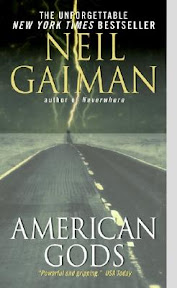 Reason for Reading: I picked up a copy of this book at a bookstore closeout in January of 2006. Although I have heard that American Gods is not necessarily the best new-to-Gaiman novel to read, I could not help myself. I'm sure my husband's encouragement to read it played a part as well. This is my 2nd selection for the Once Upon a Time Challenge.

From the Publisher: Shadow dreamed of nothing but leaving prison and starting a new life. But the day before his release, his wife and best friend are killed in an accident. On the plane home to the funeral, he meets Mr. Wednesday—a beguiling stranger who seems to know everything about him. A trickster and rogue, Mr. Wednesday offers Shadow a job as his bodyguard. With nowhere left to go, Shadow accepts, and soon learns that his role in Mr. Wednesday's schemes will be far more dangerous and dark than he could have ever imagined. For beneath the placid surface of everyday life a war is being fought—and the prize is the very soul of America.

Comments: There are good books that I am glad to see come to an end, the story winding down, the characters going as far as they can go in the story being told by the author. Then there are books where the characters get under my skin and even though I am anxious to see the story end so that I know what happens next, once it does reach that point, I wish it could go on just a little bit longer. I am not quite ready to say goodbye to the friends I had made during my journey through the pages. And so it was with Neil Gaiman’s American Gods.

The novel also has inspired my curiosity to find out more about the different mythology and religious aspects of the novel. Neil Gaiman brought a myriad of different cultural beliefs together for his story, and I found the tale of how the gods and mythical characters came to America fascinating. The various characters came with their quirks at times seemed over the top, however, that fit well with the story and made it even more appealing. There was mystery surrounding each one of the characters, and I found their histories quite intriguing. There are a few I would not have minded spending more time with, among them Ibis and Jacquel. My only regret with the novel is that I was not allowed to know more about a few of the more mysterious characters, although I imagine the author wanted to stick to the main story and not spend too much time running off on tangents just to please me. Imagine how long the book would have to be then!

Favorite Part: There was so much to like about the novel. Among my favorite characters is the obvious one, Shadow, who had a good heart. He was gentle in his own way and yet stood up for what he believed. He was loyal, sometimes to a fault. As stated before, I was quite enamored with Ibis and Jacquel and would not have minded spending more time with them. Bast and Whiskey Jack were among my favorites as well, and I wish I had been able to learn more about them.

Check out Neil Gaiman's website. He has his very own blog that is well worth reading if you are a fan of the author's work.
Miscellaneous: Tickets will be available tomorrow for the L.A. Times Festival of Books. Yippee! Anjin and I have gone the last two years and have enjoyed ourselves each time. This year, unlike the previous years, we will only be attending one day of the festival instead of both. I don't think either of us are feeling up to driving into the city two days in a row, fighting the traffic and the crowds.
Posted by Literary Feline at 4/21/2007 11:21:00 PM