Review of The Finishing School by Michele Martinez 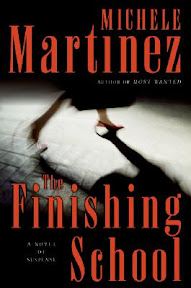 First Sentence: Even the most dedicated prosecutor hates the sound of a pager shrieking at two o’clock in the morning.

Reason for Reading: It was time to jump back into my series reading and of all my series books, The Finishing School caught my interest this time around. I enjoyed the first book by this author, called Most Wanted, which was the introduction to federal prosecutor Melanie Vargas.

Comments: It was impossible not to be swept up in the story from the very beginning. Melanie Vargas is a soon-to-be divorced mother who is trying to balance a demanding career as a federal prosecutor and being a decent mother. I have to say, she sure is lucky to have a nanny, an ex-husband, her mother, and her sister at her beck in call when she needs a babysitter at the last minute!

Melanie’s latest case requires her to call on all her babysitters since she barely has time to go home at all. It begins when her pager goes off at 2:00 a.m. in the morning. She is called out to the penthouse of a politician who has friends in high places. His daughter, Whitney, and her friend, Brianna, appear to have overdosed on Heroin, while another girl that was believed to be with them that night is missing. The three girls are all students at an exclusive private school.

Teamed up with DEA agents Ray-Ray and Bridget, and the ever sexy and irresistible FBI agent Dan O’Reilly, Melanie is determined to cover all the bases and leave no stone unturned. From the very beginning, something doesn’t sit right with Melanie. Her instincts tell her there is more to the death of the two teens and the disappearance of the third. And she couldn’t be more right.

Melanie is an extremely likeable character—she’s intelligent, gutsy, nurturing, and beautiful. Despite her bravery and risk taking behavior, at times she comes across as a damsel in distress, and so it’s a good thing she’s got Dan around to protect her. Just the same, Melanie always seems to be on the right trail and she’s not afraid to take chances to see that lives are saved and justice is served. In future books, I hope that Melanie is better able to balance being a mother with her career—that is probably my only issue with the character.

Author, Michele Martinez, has created another enjoyable and suspenseful novel that had me turning pages as fast as I could to find out what would happen next.

Favorite Part: I like that Michele Martinez adds something of Melanie’s culture and heritage to the novel. It adds something to Melanie’s character as well as the story. My favorite character is Dan O’Reilly. I think that the two main characters “misunderstandings” will get old and tired quickly if it keeps up, but for now it is still fresh and entertaining.

Miscellaneous: Three of the books I will be reviewing for Curledup.com came in the mail yesterday. Now to decide which of them to read next . . .
Posted by Literary Feline at 8/07/2006 11:37:00 PM