Review for The Shattered Blue Line by Patrick A. Davis 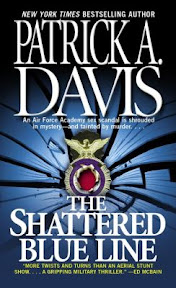 
First Sentence: She awoke with a violent start, her sleep-dulled mind reacting with confusion.

Reason for Reading: I selected to review this particular book for Curledup.com. It sounded like something I might enjoy. I don’t generally read military novels, but this one caught my interest.

Comments: The commander of the local detachment of the Office of Special Investigations (OSI), Major Nathan Malone, is certain of the end of his career when he is arrested for driving while under the influence. To make matters worse, Major Malone is called before the superintendent of the Air Force Academy, Lieutenant General Crenshaw, a sure sign of the severity of his mistake. Instead of losing his job, Malone soon discovers that he has been hand selected to lead the investigation into the murders of two female cadets.

The murders could not have come at a better time for Senator Smith who is determined to uncover a conspiracy of concealment at the Air Force Academy as part of an ongoing Congressional investigation into a possible sex scandal. It is sure to boost his chance of re-election. Threatening the Air Force Academy leadership with an investigation by independent counsel, a process that could take years, he is able to get one of his staff, attorney Kaitlin Barlow, assigned to the case. She is to have full access to any and all information she requires for the investigation much to the chagrin of the Air Force.

Assisted by Marva “Mother” Hubbard, a retired Colonel who is a civilian working for the OSI, Malone is determined to find the killer. He is unwilling to leave any stone unturned in his investigation, even if it might implicate someone of a higher rank or perhaps a friend. Kaitlin Barlow plans to stick close to Malone to ensure there is no attempt at a cover-up, despite Malone and Mother’s assurances that their only interest is to find the truth.

As the investigation into the murder gets under way, the ties to the past offer perspective into the characters on a deeper level. Kaitlin’s twin sister, Christina, was a friend of Malone’s once upon a time, both former cadets at the Air Force Academy. Christina was a victim of a vicious rape that was never solved. The incident haunts Kaitlin and Malone as well as Mother, who was the investigator assigned to Christina’s case.

The Shattered Blue Line takes readers into the heart of the Air Force Academy as the investigation unfolds. The author’s knowledge and experience as a graduate from the Academy and his life in the Air Force are put to good use. In addition, Patrick A. Davis captured the role politics can play in such a high profile investigation, where justice could easily be sacrificed for reputation and public opinion.

The theme of guilt and atonement run through the novel as the characters struggle with their own pasts. Everyone seems to have secrets they keep tucked away. It is impossible not to be drawn into the story and into the lives of the characters. As often can be found in suspense thriller novels, the main character is attractive and wealthy. Malone fits that profile well. He likes fast cars and women. He is charming and appears to have a strong sense of justice. The character of Mother was refreshing, a tough older woman with brains and sass. Kaitlin was beautiful and strong in her convictions, a definite challenge for both Malone and Mother. Each of the characters in Davis’ novel were well crafted and had hidden layers that were peeled away as the story unfolded, making for a more intriguing story.

Patrick A. Davis has adeptly woven the mystery together. The novel is full of twists and turns, some unexpected and some predictable. The Shattered Blue Line was an enjoyable reading experience. Originally published on Curled Up With A Good Book at www.curledup.com. © Wendy Runyon, 2006

Favorite Part: The setting. I had the chance to visit the Air Force Academy in Colorado and fell in love with the area. The book brought back memories from my trip.