Review of The Begotten by Lisa T. Bergren 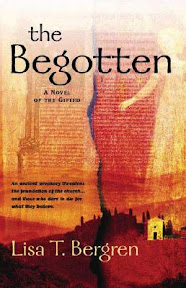 
First Sentence: “This way, Your Grace,” whispered a monk ahead of him, gesturing toward a room bathed in shadows.

Reason for Reading: I was asked to review this particular book for the Front Street Reviews website.

Comments: The Begotten is the first novel in a trilogy by author Lisa T. Bergren. It is the story of an ordinary group of people who discover that they have exceptional God-given gifts that are both miraculous and great in nature. The Gifted, as they are known, are called to come together for a divine purpose outlined in a centuries’ old letter from Paul, which has remained hidden and relatively unnoticed.

The book opens in eighth century Constantinople, as a priest, in his final act before being carried off to the pyre, asks his apprentice to take a letter from a holy manuscript and travel to Roma, where both will be safe. The Church’s hold on the people tightens, as the desire for power becomes more important than faith, and some in the Church seek to become more important than God.

The story picks up again six centuries later as Captain Gianni de Capezzana leads twenty-four knights of the Church into the catacombs in Roma where they discover just how powerful and diabolical their enemy can be. Gianni is determined to hunt down the evil Sorcerer wherever it may lead him. It is on that pursuit for the evildoer that his path crosses with a band of travelers on their way to Siena: the independent and strong-willed Lady Daria d’Angelo, who is gifted with the ability to heal; her faithful servant, the freed slave Hasani, who seems to have a talent for knowing what is to come; and a wise Dominican priest, Father Piero, who possesses a portion of the prophecy, believed to be written by Paul.

In the novel, which gets off to a slow start as the author builds the foundation for what will become a suspenseful, fast paced and intriguing story, the Gifted begin the difficult task of not only fortifying their stronghold, the home of noblewoman Lady Daria d’Angelo whose business and political clout are being threatened by outside forces, and finding worthy supporters to their cause. The chosen ones recognize immediately that their enemies will not only attack them physically, but also on a spiritual level. With the guidance of the priest Father Piero, the group find themselves questioning some of their long held beliefs and religious practices, as they reinforce their spiritual strength.

Furthermore, their enemies are vast. Not only does a confrontation with the evil Sorcerer seem imminent, but the Gifted know a threat lies with the Church as well, who will not easily tolerate a challenge to what they perceive as their religious power over the people.

Lisa T. Bergren has created the beginning of a tale that will resonant with many Christian readers, and perhaps some non-Christians as well. The author is well researched in her knowledge and interpretation of the scriptures. She has created characters who are easy to identify and empathize with, although many of the characters were two dimensional. There was very little gray area between good vs. evil. The Begotten is the promising start of what will be an entertaining trilogy.

Favorite Part: The scene in the piazza when Daria comes face to face with the Sorcerer.

Miscellaneous: Christian fiction is not really my cup of tea and so it was with some hesitation that I decided to give this particular book a try. I'm glad I decided to take a chance on it.
Posted by Literary Feline at 8/25/2006 10:46:00 AM