Review of The Strength of the Sun by Catherine Chidgey 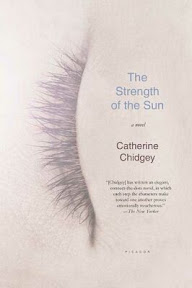 
First Sentence: One Sunday morning in 1988, a bite was taken from the sun.

Reason for Reading: When going through the list of possible books to review for Curledup.com, I came upon this title. It seemed different than the other books I was considering reviewing and sounded interesting. I decided to give it a try.

Comments: In The Strength of the Sun, the character Patrick Mercer stated, “‘My point is: a book can provide a link to other lives, a window to another time. It can illuminate the past.’” And in the case of Catherine Chidgey’s novel, this book has done just that.

Patrick Mercer, a curator at a university museum in England, left his wife in 1988, the day after the solar eclipse. Through Patrick’s love and knowledge of the history of manuscripts and the occasional myth, Chidgey was able to incorporate interesting tidbits about those topics throughout the novel. After driving his car off a bridge and into the river, Patrick suddenly finds himself in a hospital. Patrick drifts in and out of consciousness. Snatches of childhood memories fill his dreams as friends read to him from his bedside.

The day of the eclipse turned out to be a life-changing one for the Pearse family, when 15-year-old Laura goes missing in New Zealand. She had set out to watch the eclipse from the wind turbine and was never to be seen again. Six years after her disappearance, her parents, Ruth and Malcolm, give birth to a son, Daniel, who appears to have special needs. Ruth and Malcolm go through the motions of living, each in their own way, the grief and loss of their daughter never completely leaving them. Author Catherine Chidgey’s most powerful portion of the novel came through in the story of the Pearse family and their loss. It was a story that pierced the heart.

And then there is Colette, a young twenty-one year old who wants nothing more than to be out on her own, far away from her mother. She yearns to shed the clutter of the past and spread her own wings. Her mother, on the other hand, wants only to hold on tightly to everything possible, surrounding herself with memories and objects.

The book opens with a letter Colette receives from the friends of Patrick Mercer, a form letter describing his health, promising future updates, and encouraging correspondence to Patrick whether by tape or letter so that he can hear from those out there who care about him. Colette has not a clue who Patrick is, searching her memories, imagining he might be someone she met on a trip overseas.

It is from there that the seemingly unrelated pieces of a puzzle begin to fit together to form a complete portrait. Chidgey successfully integrates the past with the present. The narrative flowed back and forth in time, the lives of the various characters at first appearing to be separate, however coming together in unexpected ways. This was similar on a more personal level as well; the characters themselves seemed to gravitate toward being alone, being separate, only to be drawn together, and feel the need to connect with others as the novel progressed.

The author’s descriptive style flowed smoothly for the most part, with only a slow moment here and there. The Strength of the Sun is a novel about love and loss as well as the connectedness and distance between people. It is well worth taking the time to read. Originally published on Curled Up With A Good Book at www.curledup.com. © Wendy Runyon, 2006

Favorite Part: The story of Ruth and Malcolm, Daniel and their memories of Laura.

Least Favorite Part: I wasn’t too fond of Colette as a character. I found her to be a rather dry.

Miscellaneous: My move to the day shift may be delayed. I hope management decides to tell me one way or the other before the day I was told I would be starting my new schedule. I don't mind continuing on my current shift for awhile longer. I just don't like the limbo. Why is it that these kinds of decisions are put off until the very last minute?
Posted by Literary Feline at 8/29/2006 08:55:00 AM