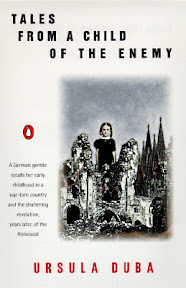 
Reason for Reading: I first heard about this little book from an online reading group, although I can’t for the life of me remember which one. I am not really sure what made me take it off my shelf to read, only that I wanted something simple and yet in line with what I have been reading so far this month (July, 2006).

From the Publiser: A German woman recalls her childhood in the rubble of Hitler's Germany--and the shattering revelation, years later, of the Holocaust in this haunting sequence of prose poems. Interwoven with these are the wrenching stories of the Holocaust survivors and their children who were her neighbors in an Eastern neighborhood in Brooklyn in the mid-sixties. Duba's confrontation with her heritage is unflinching and the stories hard to forget.

Comments: The prose is simple, the stories quick to read, and yet each poem, each story in Ursula Duba’s book share a piece of Germany’s darker history.

A couple of the poems are so full of a child’s innocence. The story about the carpet bombings, the author’s expectations that a variety of different carpets would be falling from the sky brought to mind my childhood fear of water buffalos when I thought they would be stampeding down the street. At the age of five, I had been quick to check to make sure the door was locked, not knowing that a water buffalo was not actually an animal but a source of water. There was also the story the family going on vacation to see the ruins of castles. Why travel so far to see the ruins when they lived among ruins, the children wondered.

Having grown up in Germany, being educated during the time of the 2nd World War, Ms. Duba showed through her poetry that history was not taught in the same way it is now. German children were not made aware of the atrocities committed within their own country. It was only after the war, while on a blind date, that Ms. Duba learned the truth and began her own exploration into her country’s dark history, a history she had lived through and yet had not known about. She shares some of the stories of neighbors and friends in her book, about the separation and loss of family, the guilt, and anger at what had happened. She also takes a look into the hearts of her own family and the impact the war had on non-Jewish Germans, as well as their attitudes during and after the war.

Two poems in particular stood out for me in Ms. Duba’s book. The one called "Footbinding" was one, about the hypocrisy between her mother’s philosophy that men are the hammer and women the anvil as compared to the unjust treatment and practices that other cultures practiced, such as the Chinese and their foot binding of young girls. The other was the poem, "Who Knew the Murderers", in which a Holocaust survivor asks Ms. Duba about her family history and what her family did during the 2nd World War. “They didn’t know about it,” is Ms. Duba’s reply when asked what her family thought about the atrocities that took place, the murdering of millions of people. The survivor wonders how, in all her years, she has yet to meet a German who knew what was being done and yet how was it possible that so many people had been contained and led to slaughter?

Although simple in its presentation, Ms. Duba’s book is thought provoking and conscience raising. This is a book I think would serve a good purpose as required reading in school. It not only reminds us of the horror of the Holocaust, how a civilized society can become barbaric, but also, that the Germans are struggling to overcome their dark history as well.

Miscellaneous: I was glancing over my list of books read so far this month and was shocked to see how many I have read. This makes book 11 for the month. I was only anticipating reading five or six books this month. It’s been a rich experience at that. I have had the fortunate of reading many touching books during the month of July.
Posted by Literary Feline at 7/28/2006 08:33:00 PM