Review of The Other Boleyn Girl by Philippa Gregory 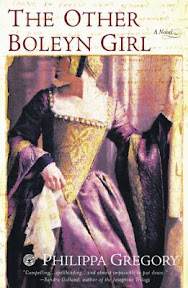 First Sentence: I could hear a roll of muffled drums.

Reason for Reading: This book was a Christmas gift from my parents. I chose to read it now because it is an upcoming buddy read for one of my online groups.

From the Publisher: When Mary Boleyn comes to court as an innocent girl of fourteen, she catches the eye of Henry VIII. Dazzled by the king, Mary falls in love with both her golden prince and her growing role as unofficial queen. However, she soon realizes just how much she is a pawn in her family’s ambitious plots as the king’s interest begins to wane and she is forced to step aside for her best friend and rival: her sister, Anne. Then Mary knows that she must defy her family and her king, and take her fate into her own hands.

A rich and compelling tale of love, sex, ambition, and intrigue, The Other Boleyn Girl introduces a woman of extraordinary determination and desire who lived at the heart of the most exciting and glamorous court in Europe and survived by following her own heart.

Comments: Perhaps I might have enjoyed this book more if I wasn’t appalled by the behavior of so many of the characters right from the very first. The young sisters, Mary and Anne Boleyn were pawns from the very beginning in gaining their family power and status in England. With what at first seemed to be a play for more land and money, soon became a game for the king’s affection and the throne. And it didn’t matter the cost. But for every victory, there was a consequence as the family soon discovered.

Philippa Gregory does have a talent for writing a historical novel that doesn’t feel at all like one. And despite it’s size, the book was a fairly quick read. She did not bog the book down with historical details and a description, kept the pace moving steadily, and was able to bring the historical characters to life.

At times I felt sorry for King Henry VIII, and yet his temper and rash decisions made that impossible. With the help of his confidants, including Anne, he bent his own religious beliefs to suit his needs. While religious interpretation is nearly always up for questioning, he used it for his own purpose and gain. It was out of that that he created the Church of England and was excommunicated from the Catholic Church.

I had little sympathy for Anne throughout the book; however, I shed a tear with Mary at the end—more for Mary’s sake than Anne’s. George was a character I liked and hoped would come out of it okay. He was truly a man who was unable to find any sort of happiness of his own without suffering grave consequences had the truth come out. Mary was much more sympathetic and definitely a good choice of narrator for the story. She still had her faults, but was by far the most promising of the Boleyn siblings.

Ms. Gregory’s book brought out some of the class differences between those living in England at the time, especially in how children are raised. The novel touched upon the double standard of how men may have any number of women as bedmates regardless of marital status and yet it is a crime punishable by death if a married woman does the same.

In the end, I came away having enjoyed reading The Other Boleyn Girl; however, the first part of the book felt more like a juicy gossip column with all the secrets and games played between the courtiers being put into print. I can see why some would find this book a great introduction into historical fiction because of the author’s story telling style. It was light fare.

Favorite Part: William Stafford’s courting of Mary was my favorite part. He was a refreshing change from the Boleyn/Howard family as well as from the Court itself. Finally a character I could like and respect!

Miscellaneous: I figured my vacation week was a good time to tackle this hefty book—although it read quickly anyway. My husband has a flat tire and wouldn’t you know it, the people at the car place replaced the wrong tire!
Posted by Literary Feline at 7/25/2006 09:53:00 AM