Review of Kitty Goes to Washington by Carrie Vaughn 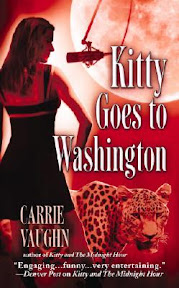 First Sentence: “We have Beth from Tampa on the line.”

Reason for Reading: I enjoyed the first book in the series and decided to give the second one a try. I chose to read it when I did because I was looking for something a little lighter topic wise than what I’d been reading recently.

Comments: What’s not to love about Kitty? She’s not your typical werewolf heroine bent on proving how tough she is. And yet, she has a tendency to stand up for what she believes and land in dangerous situations (which isn’t all that new). Kitty is easy going, intelligent, and witty. She has an innocence about her and yet she’s had her own struggles to overcome and battles to fight over the years.

Having taken her popular radio talk show on the road, Kitty is seeing the country. When she is called to testify before the Senate about the supernatural, she makes her way to Washington D.C. She soon finds herself the guest of vampire mistress who offers her protection while in the city, and amongst a myriad of other lycanthropes, including a rather sexy were-jaguar that catches her eye. As the Senate hearing, led by a Bible thumping Senator, gets under way, Kitty’s curiosity about the research being conducted by the Center for the Study of Paranatural Biology increases. And if that isn’t enough, the infamous Elijah Smith, leader of the Church of the Pure Faith, is called to testify at the hearing, raising all sorts of speculation.

Being a fan of some of the paranormal literature out there today, Carrie Vaughn’s series is fast becoming a favorite. I may not be a fan of the title of the latest novel, but I definitely enjoyed the story. It was entertaining, at times funny, and suspenseful. Carrie Vaughn has created characters that I’m drawn to. Kitty, of course, is a favorite of mine. I like the interaction between Kitty and Cormac, and Ben’s a great character as well. The vampire mistress, Alette, was an interesting character; one I wouldn’t mind delving into more deeply should Carrie Vaughn ever decide to expand on her.

The comparisons between the McCarthy hearings and the hearing about the supernatural were well made. Senator Duke’s fanaticism and prejudice came out clearly in his questioning and arguments during the hearing. There are parallels between the novel and real life in the political arena, although they might not be so obvious upon first thought.

Another theme that ran through the novel was the desire for power, a common theme in books like this. Different characters sought their own type of power in their own way, and there were several different power plays taking place in the novel.

Favorite Part: When Kitty, Jeffrey and Stockton decide to go in search of Elijah Smith. That entire scene, at the camp.

Miscellaneous: Carrie Vaughn’s novel has an added bonus at the end, a short story called Kitty Meets the Band. It’s a funny story about her interview with the band, Plague of Locusts, in which one of the members is supposedly possessed by a demon. It was a cute story that earned a smile at the end.
Posted by Literary Feline at 7/29/2006 08:34:00 PM