Review of The Kitchen Boy by Robert Alexander 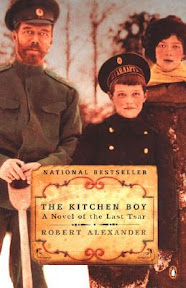 
First Sentence: Peering through the peephole of her apartment door, the old woman didn't know what to do.

Reason for Reading: Since I seem to be in a mood for historical fiction outside of the U.S., I thought Russia might be the next place I should visit. This book most caught my interest when I was deciding what to read next.

From the Publisher: Drawing from decades of work, travel, and research in Russia, Robert Alexander re-creates the tragic, perennially fascinating story of the final days of Russian monarchs Nicholas and Alexandra as seen through the eyes of the Romanov's young kitchen boy, Leonka.

Comments: The novel, The Kitchen Boy, begins with a knock on the door as American Kate retraces her grandfather’s past. From that point on, in a shift in viewpoint, her grandfather, who is determined to record his story and see his granddaughter carry out his last promise to the Romanov family, tells the story of the last days of the Romanov family in the summer of 1918. His heart is heavy with regret for the part he played in the brutal deaths of one of the most famous families in Russia as he shares his story about the family’s captivity, their strength, hope, and love for each other.

The author, Robert Alexander, captured the essence of his characters, painting a portrait of a family with his words that creates unavoidable sympathy and compassion, even with the knowledge that the Tsar and his wife had not always made the best decisions in leading their Russia. As the fate of the Romanov family, including the children, is played out, it is hard not to wish it could have been different despite the reality that their deaths were imminent.

My first thought upon finishing the book is that the outcome was not what I expected, although I did expect some sort of twist in the end. The story of the Romanov’s has been romanticized over the years, different versions of history being told and retold with a variety of outcomes. Robert Alexander’s fictional version of the story is one in many, but definitely worth taking the time to read. Although simplistic in writing style, The Kitchen Boy held a great amount of depth and insight.

Favorite Part: The hope that Sister Antonina and Novice Marina’s visits brought the family was perhaps my favorite part of the story. I came away with a lot of respect for the Tsar and his wife in the end—their strength and love for their family held them together right through to the end. It was very admirable.