Bookish Mewsings: Marion Lane and the Midnight Murder & Finlay Donovan Is Killing It

Threads of steam rose from the warm tarmac. ~ Opening of Marion Lane and the Midnight Murder 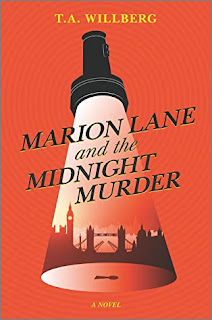 Marion Lane and the Midnight Murder by T.A. Willberg
Park Row, 2020
Crime Fiction/Historical/Thriller; 336 pgs
Source: NetGalley
When I started reading Marion Lane and the Midnight Murder, I was expecting something more along the lines of a traditional historical mystery set in 1958 with the allure of secret tunnels and a mysterious group of detectives. What I had not anticipated was a steampunk-like mystery with cool little gadgets, alchemy, a secret map, hidden rooms, and mysterious possibly-deadly tunnels.
This was such a fun read. Marion Lane, a first-year Inquirer-in-training for Miss Brickett's Investigations & Inquiries, lives with her grandmother who thinks Marion works in a bookstore and would be better off marrying a man and enjoying domestic bliss. Little does her grandmother know, she spends her days beneath the city, learning the skills it will take for her to become an official Inquirer, wearing disguises, spying, and solving crimes.
When a letter arrives late one April night, the filing assistant who receives it ends up dead. All evidence points to Marion's friend and mentor--or so someone wants everyone to believe. At the risk of losing her place at the school, Marion sets out to clear his name. This means trying to uncover secrets dating back to World War II--secrets that more than one person would prefer remain hidden.
I was quite fascinated by the intricate organization that is Miss Brickett's Investigations & Inquiries. It's like an entirely separate world underground. While some of the tunnels are safe, some are not--and are even forbidden. The organization steps in to solve crimes that Scotland Yard cannot or seems to be no help with. The inquirers in training are recruited from a wide variety of backgrounds, often displaying extraordinary skills in one area or another. In Marion's case, her skills as a mechanic make her stand out. It's not exactly the kind of job your average woman in the 1950's would do, and so what better place for her than at Miss Brickett's?
The murder itself is sort of a locked room mystery, which itself was interesting, but it was the larger mystery around it--the why--that really takes this book in an unexpected direction. I thoroughly enjoyed Marion Lane and the Midnight Murder and hope there will be more. There's so much more in this world to explore! Not to mention Marion is such a great character and I would enjoy spending more time with her and her friends.
Challenges Met:  Cloak and Dagger Reading Challenge & Winter COYER &  2021 Historical Fiction Reading Challenge

It's a widely known fact that most moms are ready to kill someone by eight thirty A.M. on  any given morning. ~ Opening of Finlay Donovan Is Killing It 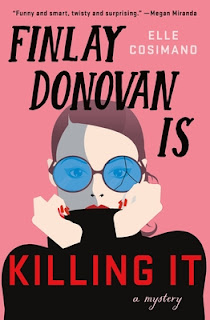 Finlay Donovan Is Killing It (#1) by Elle Cosimano
Minotaur Books, 2021
Crime Fiction/Thriller; 368 pg
Source: NetGalley
Nothing is going right for Finlay Donovan. Her literary agent is on her back about finishing her novel--it's already past deadline--her ex-husband fired the nanny without a word to her, not to mention he is threatening to seek custody of their two young children, and she has a stack  of bills she cannot pay.
While out for lunch with her literary agent, Finlay is mistaken for a contract killer when she is overheard by another customer sitting at a nearby table. The woman slips Finlay a note with a request that Finlay take care of the woman's no good husband for a price that would solve a lot of Finlay's problems. Only, Finlay is not a killer. She only writes about them.
Elle Cosimano's Finlay Donovan Is Killing It had me laughing right from the start. She is relatable and funny and I couldn't help but feel for her every step of the way. Even as she made questionable decision after questionable decision and things just seemed to snowball from there. Yes, this novel is out there and unbelievable, but it was still such fun to read. It reminded me the fun I had reading the early Stephanie Plum books by Janet Evanovich. Just as Stephanie was out of her league as a bounty hunter, so is Finlay as a hired killer. Of course, the difference being Finlay never set out to be any sort of killer.
Seeing how Finlay would get out of each mess she found herself in was part of the fun, and I could not read this book fast enough. The characters are well-developed and interesting, from the nanny, Vero, who is not only smart but sassy as well, the bartender, Julian, and the police officer Nick, to Finlay's sister and kids. I was not a fan of the ex or the new wife, but then, I imagine I wasn't supposed to be.
Adventure, mystery and comedy, with a hint of possible romance, make up Finlay Donovan is Killing It. I am so glad I took a chance on it.
Challenges Met:  Cloak and Dagger Reading Challenge & Winter COYER