Bookish Mewsings: Off the Grid and Out of Time by Monica McCarty

I was first introduced to Monica McCarty’s Highlander series by a friend, and so when I first came across the Lost Platoon series (it feels like a trilogy, but I could be wrong), I thought I would give it a try.

It was a mission that went terribly wrong. A Navy SEAL team disappears without a trace on a top secret mission to Russia. Not everyone survived, but those who do have gone into hiding and are believed to be dead. Someone is a traitor. Someone gave them away, and until they know who, the surviving SEALs plan to stay hidden until they uncover who would betray them and why. You can find my review of the first book in the series, Going Dark, here. 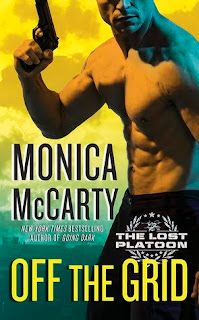 
"Travel the world," they'd said. ~ Opening of Off the Grid

Brittany Blake isn’t buying the story the government is feeding the public about the disappearance of her brother. Putting her investigative reporter skills to use, she launches her own investigation which leads her to her brother’s best friend, John Donovan, one of the surviving SEAL team members in hiding. John tries his best to throw her off the track and get her off the story—because he knows she will become a target—but perhaps she is just what the team needs to set a trap . . .

Brittany is a tenacious and focused woman on her own mission, and I enjoyed getting to know her. I could appreciate her reluctance to trust John, even though I knew he was a good guy. He may be smoking hot, but he has a reputation with the ladies and he isn’t being completely honest with her about what happened to her brother, not at first. Not to mention that John broke her heart once before. John himself comes with his own baggage, not wanting to commit because of past experiences. He and Brittany have something special though and both of them can only fight it for so long.

This really is a series that needs to be read in order. The events in each book play on each other. In addition to Brittany and John's story, readers get to see more into another budding-second-chance love story, which carried over from the first book and will continue into the third. There is plenty of suspense as Brittany and John and the others in their group get closer to the truth of what happened to the SEALs team in Russia. I definitely had my suspicions as I read this book. Full of tension and steamy romance, Off the Grid was a fun read. 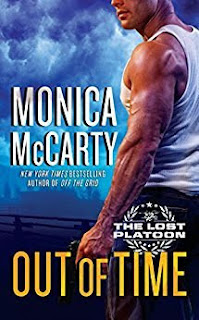 So much of what we find out about the lost platoon in the first and second book comes to a head—and what seems like a conclusion—in this third book of the series, Out of Time. And what a fitting title!

His men put a lot of trust into Lieutenant Commander Scott Taylor when he asked them to scatter across the globe and remain in hiding until they had answers to who betrayed them. He was crushed when he heard the woman he had been dating was killed in a car accident not long after she had alerted them to the betrayal. What he doesn’t want to believe, however, is that she could be behind that very betrayal, but all the evidence points in her direction.

Natalie Andersson, born Natalya Petrova, was adopted and raised by a loving American family. I admit it was a bit of a stretch for me to buy how she could be a Russian spy given her background, but for the sake of the story, I went along with it. And to be fair to her, she did what she could to sabotage the Russians’ efforts to use her without risking the lives of those she loved. That took some moxie. Now, Natalie has taken a new name and made a new life for herself, praying neither the Russians nor the Americans find out she is alive. Scott, furious and hurt, however, shows up on her doorstep demanding answers.

The love and hate relationship between Natalie and Scott runs parallel to that of Kate and Colt, whose story readers have been getting piecemeal throughout the series. Kate is probably one of my favorite characters in the series—high-powered and knows how to get things done. Colt is a hot head, and frankly, it’s no wonder Kate divorced him all those years ago. His insecurities got the better of him, and he wasn’t the best husband to her. He grows as a character throughout this series, especially in these last two books. I think of all the romance threads in the series, theirs was the one I was most drawn to.

Out of Time was action packed and high in emotion and suspense, much like its predecessors. While the romance is front and foremost in a series like this, I liked that the mystery aspect remained strong as well. It was never far in the background when it was not front and center. My suspicions from the last book proved correct.

Overall, I enjoyed this series, and, while I would not give any of these books five paw ratings, they were fun and hit the spot.