This week I am posting two reviews again in my continuing effort to get caught up with posting my reviews before I go on break near the end of the year. I had not realized how far behind I was! 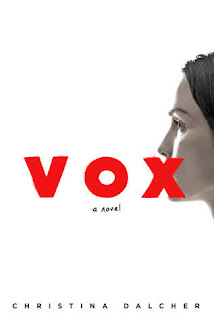 
If anyone told me I could bring down the president, and the Pure Movement, and that incompetent little shit Morgan LeBron in a week's time, I wouldn't believe them.


Cheek to the ground, I can see the locked lab door only ten feet away, and I scramble to my feet. A cold hand, heavy as a meat hook, grips my arm and pulls.


My thoughts:
It may have been the comparison to The Handmaid’s Tale or perhaps the current political climate in the United States that first interested me in Christina Dalcher’s Vox. I knew I had to read it. Set in a not so far future, women in the US are now required to wear bracelets that send debilitating shocks to the wearer if they go over their 100 word a day allotment. Dr. Jean McClellan had a successful career before, but women are no longer allowed to work nor are girls taught to read or write. I spent a lot of this book angry. Angry at the government and religious extremists. Angry at men like Jean's husband who was complicit in what how his wife and daughter were forced to live. Angry at all the people who sat by and let this happen.

Jean is given an opportunity to regain her voice because the government needs her specialized skills, and she hopes to use that opportunity to give her daughter the gift of words via bartering—at least for a short time. As a mother of a daughter myself, I felt Jean’s frustration and grief that her daughter was not given the same rights as her sons, and was learning that her place was in the background, to do as she was told and not use her voice. I felt Jean’s anguish as she watched her oldest son embrace this new Pure Movement. And I could understand how her relationship with her husband changed given how their life was before and how they live now. Jean is flawed, and I did not always agree with her choices, but there was much about her I could relate to. This book is full of emotion—sadness and rage and fear. It was hard to feel any sense of hope, at least initially.

This novel is part social commentary and part thriller. The first part of the novel introduces the reader to the characters and world they live in, along with their struggles and relationships with one another. As the novel progresses, however, the novel takes a turn into thriller territory, which added a different flavor to the novel than I initially expected. Suddenly there is hope for the future. Throughout, Vox was tense and thought provoking. While it did not rise to Atwood’s The Handmaid Tale level (is there a book out there that can, at least for me?), I liked Vox overall.

Have you read Vox? If so, what did you think? If you haven't, does it sound like something you would want to read? 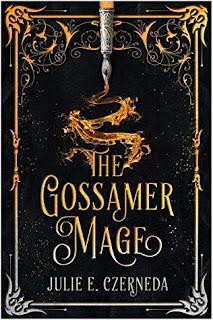 
The world was not always thus.


Nothing about Kait explained The Lady's continued distance from such a fair and true daughter. Darkest thought? For he'd plenty. The Hag bided Her time, intending to unleash Kait as Her Designate at the school, to end them all in order to deal with the evil in the urns.


My thoughts:
The novel is set in a region where magic is controlled by the Deathless Goddess, in which the price of writing magic is years off one’s life. If a mistake is made, a gossamer is made, a magical creature with a will of its own. Maleonarial is considered one of the most powerful of the Deathless Goddess’s Mage Scribes. He long ago sought isolation and had fallen out of favor. When she seeks him out through her accolades, however, he is drawn back into the life he tried to put behind him. Only, this time, he is determined to find a way to destroy the Deathless Goddess and break the hold she has on her people. But first, he must find out who or what is threatening Tananen. He finds an unusual ally in one of the Deathless Goddess’s accolades, Kaitealyon, a Daughter called to serve the Goddess. Kaitealyon and the other Daughters sense something is gravely wrong. The voice of the Goddess seems to have been silenced and something sinister is afoot. She is tasked with finding out what it could be and saving the Deathless Goddess. Maleonarial may be the only one who can actually stop it.

I have mixed feelings about this book. I found the first portion of the book difficult to follow. Perhaps it was the writing style or the mythical feel to it (although that isn’t something that always bothers me, depending on the book). It got better when the author focused more on the individual characters. And while Mal’s character is one I quickly became fascinated by, it was not until Kait was introduced that I truly was able to get into the story and began to enjoy the book more. Once that happened, it was harder to put the book down. She has a son she loves dearly, but had to leave behind because of her calling to be a Daughter. Her devotion to him is one I think most mothers would be able to relate to. I know I could.

The world Julie E. Czerneda created in The Gossamer Mage was interesting, and I liked that we get an opportunity to see if from the two different viewpoints, one of the Mage and the other of the Daughter, especially given their differing feelings about the Deathless Goddess. I really liked Kait's and Mal’s characters. They both have sacrificed so much and have good intentions. The author delves deep into their psyches and motivations as they journey together in search of answers. It was hard not to feel the connection with both of them.

I am glad I stuck with The Gossamer Mage despite my struggle with the first part of the book. While not a page turner, I did enjoy it once I finally got into it. I have one of the author’s Science Fiction novels on my TBR shelf, and I am curious what I will think of that when I get to it.

Name one book that makes you feel thankful and happy.


I am grateful for books in general, and the authors that share their stories with us. I am also grateful for
I could probably go on, but I think you get the idea. I am thankful and happy any time I finish a book that sweeps me off my feet and leaves me feeling that my time was well spent. It's all of the above. I could name so many! One I just finished is Sarah Morgan's A Wedding in December. Such a beautiful and romantic story about two sisters and their mother--and the men in their lives. Or there was The Ten Thousand Doors of January by Alix E. Harrow, which combines two of my favorite genres: historical fiction and fantasy. It was so much more than I imagined and left me wanting more (in a good way). But then there is How We Disappeared by Jing-Jing Lee, which broke my heart just as it filled it with love. And there are so many more! How do I choose just one?!

I will share with you the first book that came to mind though as I pondered this week's question. I will go with that one, although it feels unfair to stop there. 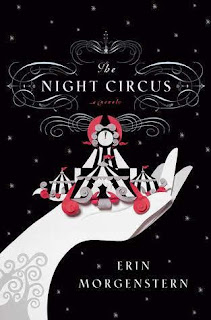 Erin Morgenstern's The Night Circus - I was under it's spell from the first word.

What about you? Is there one book that makes you feel both thankful and happy? What types of books fit into that category?

I took an interest in Don Quixote earlier this year because my husband was playing the part of the errant knight in the ballet this past summer. Alas, I did not finish it. It was a struggle to get as far as I did, and frankly, I just could not get into it. 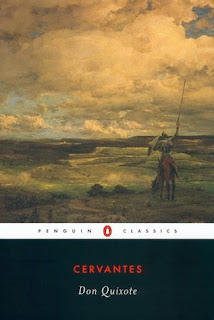 Gone are the days I could sit and read at my leisure for hours at a time or long into the night like I once did. I am sure there have been one or two in recent years. Maybe a novella if I was lucky enough to set aside a decent chunk of reading time or a book of poetry. My memory fails me--at least when it comes to the books I read for me. So, I am going with the obvious. The last book I read in a day. Because I read a lot of these types of books in a day. 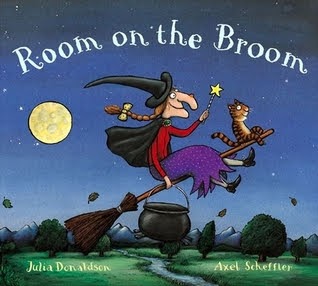 Room on the Broom by Julia Donaldson, illustrated by Axel Scheffler