Bookish Mewsings: On His Watch, Hold Your Breath & Fan the Flames in the Search & Rescue Series by Katie Ruggle

I have long wanted to give Katie Ruggle’s romantic suspense novels a try, and dove into the first three books of her Search and Rescue series. I had not realized I had the first book in my TBR pile already, and so jumped into the second book in the series first. I followed it up with the first book and then the prequel to the series. While each of the books can be read a standalone, there is an over-arching mystery that runs through the series, and so it might be a good idea to read this series in order.

The series is set in the Rocky Mountains in Colorado and each one features a different couple. Although I am not a fan of snow, I do love the mountains and Colorado has a special place in my heart. It makes the perfect setting for this series—close knit community and isolated. 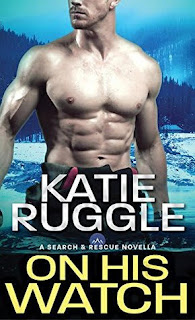 This novella kicks off Katie Ruggle’s Seach and Rescue series by introducing readers to Derek Warner and Artemis Rey. While on a school field trip, two girls go missing. Ice rescue diver Derek is teamed up with a former girlfriend, Artemis, a teacher, to search the area for the girls. Both Artie and Derek clearly never stopped loving each other, despite going their separate ways. Being thrust together under such tense circumstances, the two are forced to not only work together but also are forced to face their feelings for one another—and finally talk about what happened in the past. Derek and Artie have good chemistry even though they seem like the least likely couple on the surface, and I enjoyed reading their story. I admit I was most interested in seeing how Lou and Callum met—I had come to really like them both in Hold Your Breath. Derek has a great sense of humor and I really liked his character. This one was much more romance heavy than Fan the Flames, but there was some action and a mystery to solve just the same. 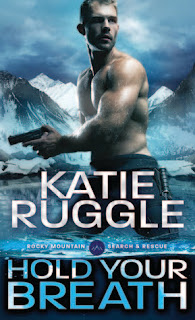 Even reading Fan the Flames I knew I was going to have to read Lou and Callum’s story. I loved Lou right away. It is probably my favorite in the series so far. Callum is a man of few words and Lou is, well, she is rarely at a loss for words. Callum Cook is the captain of the ice and rescue dive team and is a bit of a perfectionist. Louise “Lou” Sparks is new to town, trying to get a fresh start and break free from her controlling parents and ex-boyfriend. She joins the dive team as a volunteer, and on a routine training assignment, comes across a body. Determined to find out who the person was, Lou turns to Callum for help. And they step right into trouble. I loved Lou and Callum as a couple and individually. I only wish Ruggle would have let us into Callum’s past a little more. High in action with lots of sparks (no pun intended) between the two leads, this was a fun and entertaining novel. 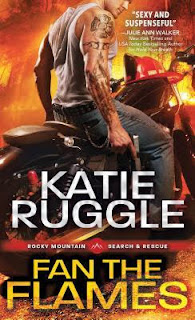 Rory Sorenson was raised by survivalist parents and is a very private person. She owns a gun shop which is frequented by the local motorcycle clubs. While she may sometimes make an under the table sale, she is always careful of who she sells too. When someone attempts to break into her well-secured shop, childhood friend Ian Walsh jumps into help. Ian Walsh walks a fine line between the good and the bad guys. He feels a strong sense of loyalty the motorcycle club and its members who have long been there for him. While at the same time, he feels the pull of his new family of firefighters, who always have his back in a pinch. Soon he finds himself accused of murdering one of his MC brothers and trying to save Rory who is being targeted by not only his own but another motorcycle club.

When I began reading Fan the Flames I wondered what I had gotten into. I am not a huge fan of the bad boy romance trope, but I soon was swept up in the story. It is a slow burn romance and action packed with a lot of tense moments. I like it when the female lead can hold her own alongside the alpha hero of the story—and Rory definitely did that. Rory and Ian both have a lot of baggage—their pasts have left deep scars and trust does not come easy for either of them. I appreciated that Katie Ruggle did not gloss over this over the course of the novel.

Overall: I need to find time to jump back into this series because I am enjoying it and am looking forward to seeing how the over-arching mystery plays out. The body found under the ice may now have an identity, but who would want him dead and why? The mystery definitely takes a backseat to the romance in each of these books, but it is never completely out of mind.

Have you read this series or another by Katie Ruggle? What did you think? Does this sound like something you would give a try? Do you enjoy romantic suspense?