Waiting to Read Wednesday: Discount Armageddon,Rebel, Murder in Kew Gardens, & The Woman in the White Kimono 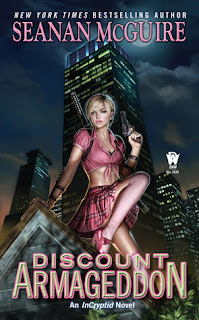 Cryptid, noun: Any creature whose existence has not yet been proven by science. See also "Monster."

Crytozoologist, noun: Any person who thinks hunting for cryptids is a good idea. See also "idiot."

The Price family has spent generations studying the monsters of the world, working to protect them from humanity—and humanity from them.

Enter Verity Price. Despite being trained from birth as a cryptozoologist, she'd rather dance a tango than tangle with a demon, and is spending a year in Manhattan while she pursues her career in professional ballroom dance. Sounds pretty simple, right?

It would be, if it weren't for the talking mice, the telepathic mathematicians, the asbestos supermodels, and the trained monster-hunter sent by the Price family's old enemies, the Covenant of St. George. When a Price girl meets a Covenant boy, high stakes, high heels, and a lot of collateral damage are almost guaranteed.

To complicate matters further, local cryptids are disappearing, strange lizard-men are appearing in the sewers, and someone's spreading rumors about a dragon sleeping underneath the city... [Goodreads Summary]

Why I want to read it: Funny story. I fell in love with Seanan McGuire last year when I read the first couple books in her Ghost Roads series. I hadn't realized I had another of her books sitting on my TBR pile I had not yet read. I have heard great things about the Incryptid series though and definitely plan to read this one. Hopefully soon-ish. 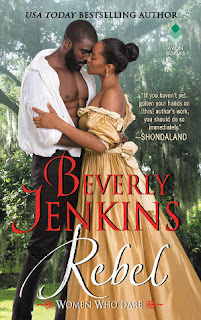 Valinda Lacey's mission in the steamy heart of New Orleans is to help the newly emancipated community survive and flourish. But soon she discovers that here, freedom can also mean danger. When thugs destroy the school she has set up and then target her, Valinda runs for her life—and straight into the arms of Captain Drake LeVeq.

As an architect from an old New Orleans family, Drake has a deeply personal interest in rebuilding the city. Raised by strong women, he recognizes Valinda's determination. And he can't stop admiring—or wanting—her. But when Valinda's father demands she return home to marry a man she doesn't love, her daring rebellion draws Drake into an irresistible intrigue. [Goodreads Summary]

Why I want to read it: Beverly Jenkins' name is not only the first often mentioned as one of the best romance authors of color, but also as one of the best romance writers in general. She's high on my list of must read authors, and her upcoming novel, Rebel, caught my attention when I heard about it. Valinda sounds like a great character, and I cannot wait to get to know her and Drake. And New Orleans! What an awesome setting! 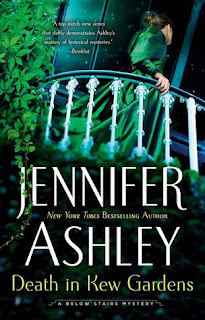 Kat Holloway steps out from beneath the stairs and into international intrigue, where murder and stolen treasure lurk among the upper echelons of Victorian London.

In return for a random act of kindness, scholar Li Bai Chang presents young cook Kat Holloway with a rare and precious gift—a box of tea. Kat thinks no more of her unusual visitor until two days later when the kitchen erupts with the news that Lady Cynthia's next-door neighbor has been murdered.

Known about London as an "Old China Hand," the victim claimed to be an expert in the language and customs of China, acting as intermediary for merchants and government officials. But Sir Jacob's dealings were not what they seemed, and when the authorities accuse Mr. Li of the crime, Kat and Daniel find themselves embroiled in a world of deadly secrets that reach from the gilded homes of Mayfair to the beautiful wonder of Kew Gardens. [Goodreads Summary]

Why I want to read it: This is book three in one of my favorite historical mystery series. There's no way I can pass it up! I just love Kat and Daniel. 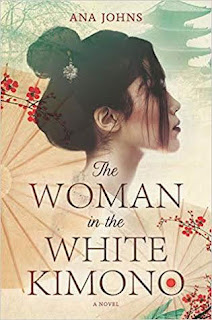 Oceans and decades apart, two women are inextricably bound by the secrets between them.

Japan, 1957. Seventeen-year-old Naoko Nakamura’s prearranged marriage to the son of her father’s business associate would secure her family’s status in their traditional Japanese community, but Naoko has fallen for another man—an American sailor, a gaijin—and to marry him would bring great shame upon her entire family. When it’s learned Naoko carries the sailor’s child, she’s cast out in disgrace and forced to make unimaginable choices with consequences that will ripple across generations.

America, present day. Tori Kovac, caring for her dying father, finds a letter containing a shocking revelation—one that calls into question everything she understood about him, her family and herself. Setting out to learn the truth behind the letter, Tori’s journey leads her halfway around the world to a remote seaside village in Japan, where she must confront the demons of the past to pave a way for redemption.

In breathtaking prose and inspired by true stories from a devastating and little-known era in Japanese and American history, The Woman in the White Kimono illuminates a searing portrait of one woman torn between her culture and her heart, and another woman on a journey to discover the true meaning of home. [Goodreads Summary]

Why I want to read it: Doesn't this just sound like it will pull at the heartstrings over and over? I enjoy dual timelines that cross the generations, not to mention the cultural aspect. I cannot wait to read this one.


Do any of these sound like books you would like to read? What upcoming releases are you looking forward to reading?