I know what most of you are thinking. It is way too early to be thinking about holiday-themed books.


Publishers do not think so, however. And so I give you my early Christmas edition! 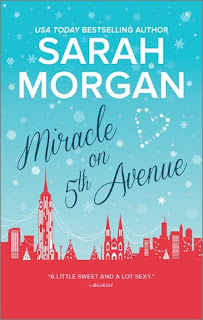 It will take a Christmas miracle for two very different souls to find each other in this perfectly festive fairy tale of New York!

Hopeless romantic Eva Jordan loves everything about Christmas. She might be spending the holidays alone this year, but when she's given an opportunity to house-sit a spectacular penthouse on Fifth Avenue, she leaps at the chance. What better place to celebrate than in snow-kissed Manhattan? What she didn't expect was to find the penthouse still occupied by its gorgeous—and mysterious—owner.

Bestselling crime writer Lucas Blade is having the nightmare before Christmas. With a deadline and the anniversary of his wife's death looming, he's isolated himself in his penthouse with only his grief for company. He wants no interruptions, no decorations and he certainly doesn't appreciate being distracted by his beautiful, bubbly new housekeeper. But when the blizzard of the century leaves Eva snowbound in his apartment, Lucas starts to open up to the magic she brings…This Christmas, is Lucas finally ready to trust that happily-ever-afters do exist? [Goodreads Summary]

Why I want to read it: I have only read one Sarah Morgan romance, and I was smitten. I have been wanting to read more of her books, and what better than through a Christmas themed novel? 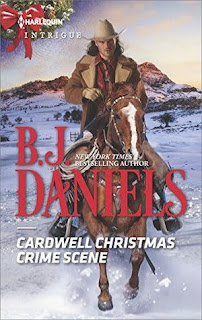 A conman's daughter takes refuge with the family she never knew she had in New York Times bestseller B.J. Daniels's latest addition to the Cardwell family saga.

Dee Anna Justice had thought that her convict father was her only living relative. Now Walter Justice, fearing for his daughter's safety, urges her to seek out her cousins in Montana. Calling in a decades-old debt, he also enlists private investigator Beau Tanner to protect her.

Despite their fiery attraction, she resents the bodyguard her dad foists on her. Trust doesn't come easy to DJ. But the warm, embracing family she finds at Cardwell ranch just might begin to soften her suspicious nature, and learning to trust the sexy PI may be the key to saving her life. [Goodreads Summary]

Why I want to read it: I tend to favor romance novels that add in a bit of suspense, and this one sounds like it has a good mix of both. 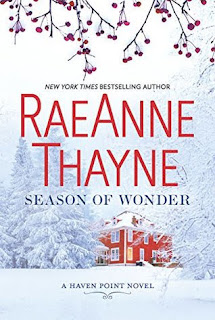 He’s giving her children a season of wonder…


Dani Capelli seized a chance to start over in a small town with her daughters. Now, facing her first Christmas in Haven Point, she wonders if leaving New York was a mistake. Dani loves working alongside veterinarian Dr. Morales, but her two children aren’t adjusting to small-town life. And then there’s Dr. Morales’s son, Ruben—Dani’s next-door neighbor. Gorgeous, muscled and dependable, the deputy sheriff is everything she secretly craves and can’t bear to risk loving…and losing.

Ruben never pictured himself falling for a big-city woman like Dani. But beneath her prickly facade, she’s caring and softhearted and she needs all the love and protection he can give. When Dani’s teenage daughter starts acting out, Ruben draws on family traditions to show the girls just how magical a Haven Point Christmas can be. But can he convince Dani that she’s found a home for the holidays—and forever—in his arms? [Goodreads Summary]

Why I want to read it: RaeAnne Thayne is my favorite romance novelist. Her characters are well developed and complex and their romances are always swoon-worthy. I cannot wait to see read her latest. 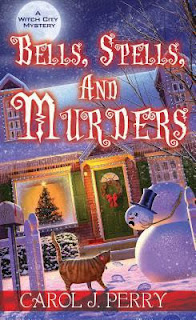 Lee Barrett has landed her dream job at Salem's WICH-TV. As the new field reporter, she'll be covering events live as they're unfolding. Next on her holiday checklist is an interview with the beloved chairman of a popular walking tour through Salem's historic districts. But it may be his ghost walking this snowy Noel season after Lee finds him murdered in his stately offices, bloody Santa hat askew.

With her police detective boyfriend working the case and a witch's brew of suspects--including some bell-ringing Santas--Lee chases down leads aided and abetted by her wise cat O'Ryan and some unsettling psychic visions of her own. When a revealing clue leads to another dead body, not even a monster blizzard can stop Lee from inching closer to the truth . . . and a scoop that could spell her own demise this killer Christmas. [Goodreads Summary]

Why I want to read it: I cannot let this holiday season slip by without a Christmas themed cozy mystery. Add in a witch and a cat? I do not know why I have not tried this series before! 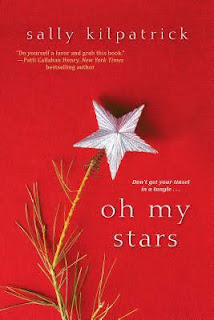 A heartwarming, hilarious Christmas story with a Southern twist.

Like most things in Ellery, Tennessee, this year's Drive Thru Nativity is a little unconventional. The Dollar General parking lot doubles as a Bethlehem stable, and widowed writer Ivy Long, who's been roped into playing Mary, sure as heck isn't a virgin. But then comes an unexpected development: a genuine, real-life baby left in the manger, with only a brief note. And somehow, in the kerfuffle that follows, Ivy finds her life is about to change . . .

The holidays are a bittersweet time for Ivy--filled with memories of her beloved late husband and reminders that life doesn't always offer the happily-ever-afters her readers expect. So when Ivy ends up with custody of the baby, she can only chalk it up to a Christmas miracle. She doesn't know if it will be forever, but with help from family, she'll make little Zuzu's first Christmas a good one. The nativity's Joseph, aka Gabe Ledbetter, has a pediatrics background that's coming in mighty handy. In turn, Ivy is helping Gabe find his place in the quirky community. If that place turns out to be somewhere near Ivy, well, maybe this particular Christmas story will turn out to be merry and bright after all . . . [Goodreads Summary]

Why I want to read it: A touch of the Christmas spirit seems strong in this one. I have a feeling I will enjoy getting to know Ivy and Gabe and the "quirky" folks in Ellery, Tennessee. 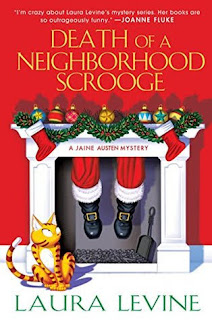 Freelance writer Jaine Austen is feeling festive about spending Christmas house-sitting at a posh Bel Air mansion, accompanied by her friend Lance and her cat, Prozac. But when a grumpy neighbor gets himself iced, she’ll have to find the culprit or she may spend the New Year in jail . . .

Scotty Parker is a former child star who once played Tiny Tim, but now he’s grown up into the role of neighborhood Scrooge. He cuts the wires on his neighbors’ Christmas lights and tells local kids that Santa had a stroke. And his miserly, bah-humbug attitude lasts year-round—a fact known all too well by his current wife, his ex-wife, his maid, and many more.

Scotty thinks he can stage a comeback with the screenplay he’s working on (The Return of Tiny Tim: Vengeance Is Mine!), and Jaine’s been reluctantly helping him edit it. So when Scotty is bludgeoned with a frozen chocolate yule log and the police start making a list of suspects and checking it twice, Jaine’s name is unfortunately included. True, she’s been under some stress, with Lance trying to set her up on dates and her fickle feline taking a sudden liking to someone else—but she’s not guilty of murder. Now she just has to prove it, by using her gift for detection and figuring out who committed this holiday homicide. [Goodreads Summary]

Why I want to read it: Laura Levine is one of those authors I have been meaning to try for awhile now, but just haven't managed to. Her Jaine Austen series is a long running one, but this one seems like a good place to jump in. A little mystery to break up the holiday romance.