The clatter of crockery on the flagstone floor broke my heart. ~ Opening of Scandal Above Stairs 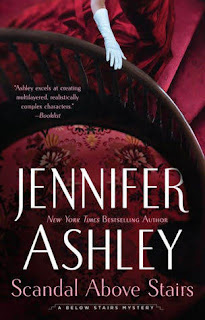 Kat Holloway takes great pride in her work as head cook for a respected family. She also has a nose for getting to the source of a problem, even if it is the theft of priceless artwork or, God forbid murder. When asked by Miss Cynthia, one of her employers to look into the theft of artwork in one of Cynthia’s friend’s wealthy friends, Kat cannot say no. Could the theft be tied to the recent disappearance of antiques from not only private collections in homes but also the British Museum as well? Searching out her good friend, the mysterious Daniel McAdam, Kat finds him playing pawnbroker out to catch a thief of his own. Only, a murder with Daniel as the lead suspect raises the stakes.

There is a new character thrown into the mix in Scandal Above Stairs, a woman McAdam has sent Kat’s way who seems to be in need of some good polishing and help. Tess is street smart and not always the most eloquent, but a quick learner and Kat decides to give her a chance, despite her reservations—and suspicions that Tess is keeping secrets.

I have so much love for this series. I enjoyed this book just as much, if not more, than the first. We get a little more of a glimpse into who Daniel McAdam is—although he is still a mystery. McAdam is quite devoted to our clever and level-headed cook, even if f she is reluctant to admit it. It was also good to join up with some of my other favorite characters from the series, including the eccentric Miss Cynthia and Mr. Thanos, and Daniel McAdam’s son James. I love how Kat has taken James under her wing and is so protective of him. She can relate somewhat to his situation given her own with her daughter Grace.

The mystery in Scandal Above Stairs kept me guessing, taking the reader from the high end homes of the wealthy to the seedy underbelly of London. Seeing Kat in action is always a pleasure, and I most enjoy getting to know and spending time with the various characters in Jennifer Ashley’s series.