The body lay naked and facedown, a deathly gray, spatters of blood staining the snow around it. ~ Opening of Ancillary Justice 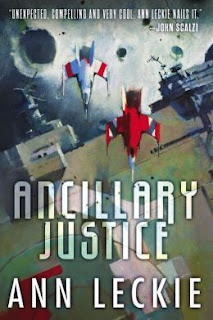 On a remote, icy planet, the soldier known as Breq is drawing closer to completing her quest. Breq is both more than she seems and less than she was. Years ago, she was the Justice of Toren--a colossal starship with an artificial intelligence linking thousands of corpse soldiers in the service of the Radch, the empire that conquered the galaxy. An act of treachery has ripped it all away, leaving her with only one fragile human body. And only one purpose--to revenge herself on Anaander Mianaai, many-bodied, near-immortal Lord of the Radch.

Ancillary Justice has gotten mixed reviews from friends who have read it. I was not sure what to expect. From the description, I imagined it would be heavy on the technical, and in some ways it was. It took me a moment to get into the mindset of the first person narrator. Breq or Esk One Nineteen or Toren, isn’t your typical narrator. She is an ancillary, a part of a ship. Or rather the ship itself, depending on how you look at it.

In the end, I really liked Ancillary Justice--from the unique viewpoint the novel is told in to Breq herself, both as a whole and as a part. I loved the detailed world Leckie has created and the story she tells here. In the first part of the novel, Breq is on a mission to find someone who has something she wants—or rather, needs.

She runs into someone from her past who needs help, wanted or not. Breq isn’t quite sure why given she didn’t especially care for this person (Severign) when she knew her (or is it him? Gender in this novel is a bit confusing, and I'm not even 100% sure Breq is a woman--in my mind she is, so I went with it here), but she helps anyway.

Breq is passing as human—and does so quite well. She has spent the last twenty years practicing. She’s tough as nails, smart, and resourceful. She is the kind of person who gets things done. I found her relationship with Severign an interesting one. Breq clearly could have left Severign at any point to continue on her mission, and yet she doesn’t. She never quite trusts Severign—and frankly, I didn’t either—but she really has no one else. Nor does Severign.

Ancillary Justice takes the reader back and forth between the past and present as we learn what led up to Breq's current situation, and what she is up to in the here and now. Tension builds as the story progresses. I found it all very intriguing and had trouble pulling myself out of the book when I had to. The second half of the novel especially is more action packed and had me turning pages as fast as I could to find out what would happen next. There are a number of tense moments that had me unsure which direction the book would go.

Leckie has created a complex world, and it is in the telling of Breq’s back story that we more fully get to understand it, including the political climate of the times. She takes an interesting approach in narrating the story, and I imagine it was a challenge to capture the full essence of Breq and just exactly who she—or what—she is. I was quite impressed with this first novel in the trilogy and look forward to reading more by Ann Leckie.

You can learn more about Ann Leckie and her books on her website. She can also be found on Twitter.